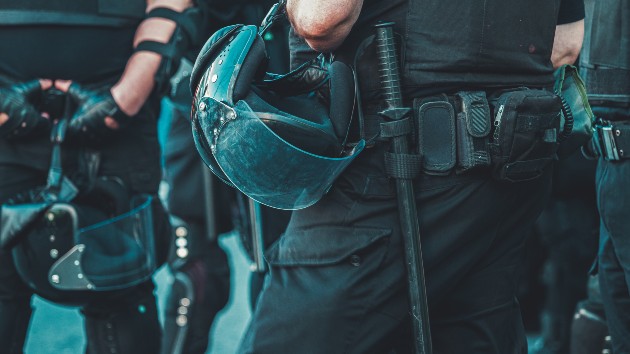 By BILL HUTCHINSON, ABC News(NEW YORK) — Two independent studies have drawn the same conclusions: billions of dollars in surplus military equipment, including armored tanks and high-powered rifles, that have been transferred by the federal government to thousands of U.S. police departments have not reduced crime or increased officer safety.The studies come amidst a national debate over whether to defund law enforcement agencies, which was sparked by coast-to-coast protests over police brutality and a string of fatal police-involved encounters with Black people.The two peer-reviewed studies, one by a researcher at the University of Michigan and the other by scholars at Emory College of Arts & Sciences and Louisiana State University, were both published on Monday in the London-based journal Nature of Human Behaviour.The studies allege the Trump administration used “unreliable” data to justify a 2017 executive order that bolstered the Pentagon giveaway program by rolling back restrictions on the types of military equipment that can be distributed to police departments.“I think far too frequently we see public policy enacted on a hunch about what it will do and we don’t spend much effort evaluating whether they work as intended. This is one very glaring example,” Tom Clark, co-author of one of the studies and a professor of political science at Emory, told ABC News.”The collective assessment of the two studies is that … the distribution (of military equipment) to local law enforcement doesn’t seem to affect one way or the other. It doesn’t reduce crime, it doesn’t lead to an increase in crime. It doesn’t seem to reduce officer injuries. It doesn’t seem to increase them either,” Clark said.

Federal program scrutinizedThe studies scrutinized the federal Law Enforcement Support Office (LESO) 1033 Program, which was established in 1990 and originally provided military surplus to be used in drug enforcement by federal and state law enforcement agencies. The program was expanded in 1997 to include all law enforcement agencies with preference given to those with anti-drug or anti-terrorism programs.Critics have claimed the program, which is administered by the federal Defense Logistics Agency (DLA), promotes a warrior mentality over a guardian approach to policing. But law enforcement officials say the program provides equipment most police departments can’t afford on their own.Michelle McCaskill, a spokesperson for the DLA, told ABC News that Congress authorized the 1033 Program “to make excess military equipment available to law enforcement as a way to maximize tax dollars, give law enforcement agencies additional support in counter-drug and counter-terrorism operations and enhance public safety.””DLA is responsible for the management of the program and continues to make improvements for efficiency, cost effectiveness, transparency and inventory control,” McCaskill said. “As lawmakers pursue policy goals regarding the disposition of excess military equipment through the legislative process, DLA will abide by all statutory and regulatory rules that are put in place.”The 1033 Program is just one of several ways law enforcement agencies can acquire surplus military equipment, including grants offered by the Department of Homeland Security, the U.S. Department of Justice and the U.S. Department of the Treasury Forfeiture Fund’s Equitable Sharing program.In 2015, the Obama administration rolled back the 1033 Program through an executive order that recalled certain items, such as bayonets, and tracked armored vehicles and grenade launchers, from police departments. The order was prompted by the 2014 riots in Ferguson, Missouri, over the fatal police shooting of a Black teenager, Michael Brown, in which police responded with armored vehicles, military-style weapons and contingents of officers decked out in combat gear.The Trump administration enacted a new executive order in 2017 that did away with the Obama reforms. Then-U.S. Attorney General Jeff Sessions announced the change during a meeting with members of the Fraternal Order of Police, saying, “We will not put superficial concerns above public safety” and ensured to the group that “you can get the lifesaving gear that you need to do your job and send a strong message that we will not allow criminal activity, violence, and lawlessness to become the new normal.”Kenneth Lowande, an assistant political science professor at the University of Michigan and author of one of the new studies titled “Police Demilitarization and Violent Crime,” said his research showed the Trump administration based its order on flawed studies that claimed military-grade equipment police departments received through the program reduced crime.”My biggest concern is that those claims have been made by prior studies. They were explicitly suggesting that by giving military hardware to police departments, it would deter criminals from committing crimes,” Lowande told ABC News. “It’s just not an accurate record. It was never designed to be used to test that hypothesis.”

Equipment unused or malfunctionedLowande said he examined 3.8 million archived inventory records for his study and found that much of the equipment sat unused, malfunctioned or was given away to other law enforcement agencies and no longer properly accounted for.”When you look at those types of police department’s crime rates over time, you don’t see any differences,” Lowande said.He said that after the Obama administration’s rollback on the 1033 program — which he described as mostly “symbolic” — there was no evidence it impacted the crime rate.“So, if this equipment was playing a big role in reducing crime in those areas, you would have expected to see crime go up and it just didn’t,” Lowande said.Clark said his team’s study found that due to lax record-keeping, it was difficult to determine how much of the equipment was actually being used by police departments.”Our findings suggest this program, which is roughly 30 years old, isn’t actually contributing to public safety,” Clark told ABC News.However, Clark said other equipment police departments receive from the military like furniture, helmets, boots and backpacks are heavily used by law enforcement agencies.As the debate over defunding police agencies goes on, Lowande suggested that “common ground” could be found by people on both sides of the issue of supplying military equipment to law enforcement agencies.”I think the program does a lot of good, but there ought to be some kind of limits, and there are reasonable limits that I could understand that should exist,” Lowande said.

Police officials say program helpsSome police officials are skeptical and dismissive of the duel studies.”This is just a symptom of the larger defund the police movement and this has turned political,” retired police Sgt. Betsy Brantner Smith, a spokesperson for the nonprofit National Police Association, which educates the public on policing in America, told ABC News. “Obama took it away, Trump gave it back, and now we’ll probably see Biden take it away again so that they can say, ‘I took this away from the big bad police."”Smith, who has also been a police trainer for nearly 30 years, conceded that some of the military equipment is used infrequently, but added, “When we need them, we need them.”She said she is aware of instances where the equipment has helped save the lives of both officers and civilians, including when military-issued armored vehicles have been used in rescue operations or to safely positioned hostage negotiators close to an active, dangerous crime scene.She noted that nearly 300 U.S. law enforcement officers have been injured or killed in shootings, including several ambushes, this year alone.“We are very often outgunned,” Smith said. “Our body armor is kind of minimalistic because it’s something we have to wear 12 hours a day.”Smith said she fears that if the 1033 Program is abolished or severely curtailed, “it’s not going to be the police who are going to get hurt, it’s going to be citizens.”Patrick Yoes, national president of the Fraternal Order of Police, the world’s largest organization of sworn law enforcement officers, also slammed the two studies as “convoluted logic.””It has never been the contention of the FOP that surplus military equipment prevents crime, but rather that such equipment plays a critical role in protecting police officers and citizens in life-threatening situations such as active shooters at large, civil disturbances, and natural disasters,” Yoes said in a statement to ABC News. “Arguments that police officers in a deadly force situation are not safer in an armored vehicle is at variance with common sense.”Yoes added, “Sadly, our profession is besieged with demands that we prove the negative, even when the negative premise is flawed.”Copyright © 2020, ABC Audio. All rights reserved.