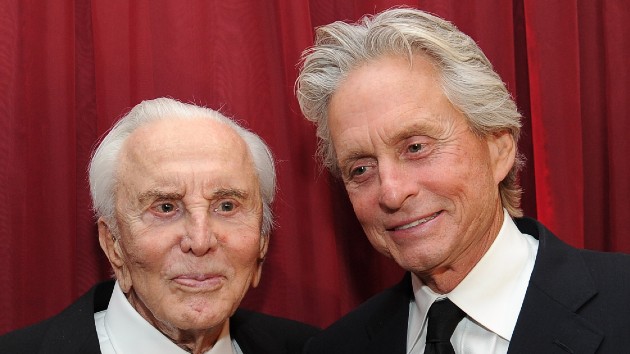 (LOS ANGELES) — Actor Kirk Douglas would have turned 104 on Wednesday and his family spent the day composing messages that honored the late Hollywood legend.

Douglas passed in February of this year.

The Spartacus star’s son, Michael Douglas, shared a video that repeated the best advice his father ever gave him, which he shared in a voice over as photos of the two through the years flashed across the screen.

“Whatever you do, you do it to the best of your ability,” The 76-year-old actor narrated in the tribute video. “You leave that job knowing that you couldn’t have done anymore, and then screw it. Walk away. You’ve done the best. Don’t look back.”

In the caption, Douglas expressed, “Happy Birthday Dad! I miss you and thank you for always giving the best advice!”

His wife, Kirk Douglas’ daughter-in-law, Catherine Zeta-Jones also honored the late actor on Wednesday by sharing a sweet photo of the two sharing a kiss.

Michael broke the news of his father’s death, writing on Instagram, “It is with tremendous sadness that my brothers and I announce that Kirk Douglas left us today at the age of 103. To the world, he was a legend, an actor from the golden age of movies who lived well into his golden years, a humanitarian whose commitment to justice and the causes he believed in set a standard for all of us to aspire to.”