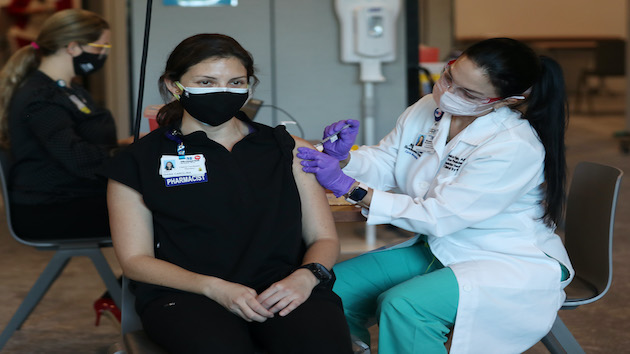 (NEW YORK) — As the first COVID-19 vaccine authorized in the United States rolled out across the country this week, senior Trump administration officials weighed whether it would be worth it for them to essentially jump the line and get publicly inoculated in order to set an example for possibly skeptical Americans, as acting Defense Secretary Christopher Miller was doing to show members of the military on Monday.

They and the incoming Biden administration also have been considering whether senior officials should receive early access to the vaccine to protect the health of the nation’s leaders and key members of the country’s national security apparatus, in order to ensure the continuation of government.

President Donald Trump, who likely already has some degree of immunity after contracting this fall, has been vague about whether he would be willing to be among the first to receive jabs from the limited supply of doses available. On Sunday night, he indicated that he might wait.

“I am not scheduled to take the vaccine, but look forward to doing so at the appropriate time,” Trump tweeted.

President-elect Joe Biden, though, has expressed a willingness to get inoculated.

“I’m certain that he will get vaccinated,” the federal government’s top infectious disease official, Dr. Anthony Fauci, said in an interview with MSNBC on Monday. “I think that it is a question of when he will come do that, and we’re in discussions with that.”

Asked last month whether he would get inoculated once a vaccine was authorized, Biden said he “wouldn’t hesitate to get the vaccine” if Fauci, who directs the National Institute of Allergy and Infectious Diseases, approved of it — which Fauci has since said he has.

“It’s important that people who are in the greatest need get it,” Biden said on Nov. 16. “I wouldn’t hesitate to get the vaccine. But I also want to set an example.”

When asked Monday about Biden’s plans to get the COVID-19 vaccine, a transition official told ABC News the president-elect is in touch with Fauci, and plans to take the vaccine in public when he recommends he do so.

Fauci, who is advising the current administration and plans to serve as Biden’s chief medical adviser on the pandemic, said he thought he would get vaccinated himself publicly “within a week.”

“As soon as my turn comes up, which likely will be very soon, I’m going to be available to get vaccinated publicly, so that people can see that I feel strongly that this is something we should do,” Fauci said.

The Centers for Disease Control and Prevention recommended this month that the first tranche of doses of the vaccine go to health care workers treating patients and to workers and residents in nursing homes and other long-term care facilities, although it was ultimately up to state and regional leaders how to apportion it within their jurisdictions.

The Food and Drug Administration authorized emergency use of the vaccine, produced by the pharmaceutical companies Pfizer and BioNTech, on Friday.

Some doses have also been set aside for the military and federal government, too.

After The New York Times and other outlets reported Sunday that senior White House officials were in line to receive the vaccine first, Trump tweeted that those working there “should receive the vaccine somewhat later in the program — unless specifically necessary.”

“I have asked that this adjustment be made,” he added, without who would still qualify and how delayed others’ inoculations would be.

Earlier Sunday, a spokesman for the White House’s National Security Council, John Ullyot, had confirmed senior federal officials would receive the vaccine, nodding to both the need to ensure the “continuity of government” and reassure the public about the vaccine’s safety.

“Senior officials across all three branches of government will receive vaccinations pursuant to continuity of government protocols established in executive policy,” Ullyot said in a statement. “The American people should have confidence that they are receiving the same safe and effective vaccine as senior officials of the United States government on the advice of public health professionals and national security leadership.”

In polls over the last several months, Americans’ have retained a healthy level of skepticism about the vaccine, particularly as Trump has repeatedly politicized the already record-pace vaccine development process.

But recent surveys have shown more Americans willing to get it. In a poll conducted by ABC News/Ipsos over the weekend, 84% of Americans said they would receive it — although half of them said they would wait a bit before doing so.

Still, some Americans — 15% — continued to oppose receiving the vaccine, and partisanship played a key role. Republicans were more than four times as likely as Democrats and nearly twice as likely as independents to say they would never get it.

Trump and other senior officials in his administration, like Vice President Mike Pence, getting vaccinated before cameras could encourage those GOP skeptics to get jabbed themselves.

“We also recognize that there’s a symbolic part of someone like me getting vaccinated, giving people confidence that they can get vaccinated,” U.S. Surgeon General Jerome Adams said Monday in an interview with ABC News Chief Anchor George Stephanopoulos on “Good Morning America.”

Three former U.S. presidents, Barack Obama, George W. Bush and Bill Clinton, have said they would get publicly vaccinated for that reason.

About 50 senior civilian and military leaders, including acting Defense Secretary Miller and Gen. Mark Milley, the chairman of the Joint Chiefs of Staff, were getting vaccinated publicly to encourage military service members to take the vaccine.

A spokesperson for Pence said Monday the vice president’s “team has begun to discuss internally about the possible how and when the VP might receive the vaccine.” Pence said last month he would “be proud to take a vaccine the moment that it’s available” and has also said that he would do it “the very moment that it’s appropriate for somebody in my category.”

Congressional leaders have indicated they are discussing vaccine distribution with the Capitol physician’s office, although they have yet to make a decision. Aside from promoting confidence in the vaccine, some members of Congress — who crisscross the country for work — face a greater risk of experiencing severe symptoms from COVID-19 because of their advanced age.

House Democratic Leader Steny Hoyer, 81, told reporters Wednesday that there were still “ongoing discussions” regarding how to proceed, and he noted that “many” members qualified as “high-risk” due to their age and that it was critical for members of Congress be able to operate amid an ongoing pandemic.

But getting early access could also create the impression among the public that officials from the White House to Capitol Hill and the agencies across the nation’s capital are opportunistically jumping the line in order to save themselves from the virus amid a pandemic that continues to rage.

Since a legitimate argument could be made for or against Trump deciding to get inoculated, “it would help for the president to be transparent about his reasoning,” whatever he chooses, Dr. Mark Siegel, a Yale University critical care physician and medical ethicist, told ABC News.

“For example, it would great if he were to say that he stands behind the safety and efficacy of the vaccine but is holding off on taking it now so others with a more urgent need can get it first, but that he will take the vaccine as soon as he is eligible,” Siegel said. “To the extent that he confuses the issue, people might wonder if there’s a deeper reason that he’s refusing to take the vaccine and for those who follow his lead, this could suppress vaccine uptake.”

If Trump got vaccinated on camera, it would not be the first time for a president to make a public display of being vaccinated himself.

Obama rolled up his sleeve in order to receive an H1N1 inoculation in 2009. Former President Gerald Ford got one for swine flu in 1976 — although that vaccine initiative was plagued by issues.