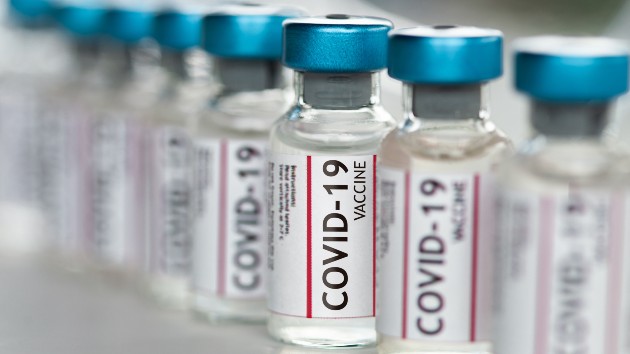 By IVAN PEREIRA, ABC News(NEW YORK) — The rollout of the first coronavirus vaccine began Monday morning as the first doses of the Pfizer medication was administered to health care workers and nursing home staffers.A doctor from Northwell LIJ Medical Center on Long Island was vaccinated at 9:23 a.m. during a livestreamed event with New York Gov. Andrew Cuomo. “You didn’t flinch,” Cuomo said.The University of Louisville Hospital in Kentucky will receive its first delivery of the vaccine at 9:30 a.m. and at 10:30 a.m. Three doctors and two nurses will receive the vaccine.Other locations in Connecticut, New York, Iowa, Washington, D.C., and Michigan are also expected to administer vaccine doses on Monday.The rollout comes less than a week after the U.S. Food and Drug Administration authorized the vaccine for emergency use for Americans over 16. The order from the FDA led to the pharmaceutical company shipping 2.9 million doses to 636 sites across the country.Pfizer, which produced the vaccine alongside German company BioNTech, began shipping the doses from its Michigan warehouse Sunday directly to those sites, which were pre-selected by governors and local health officials.Pfizer said it would roll out a second batch of 2.9 million doses shortly after the first batch. The U.S. government is opting to keep 500,000 doses in reserve to address any shipping or distribution mishaps.The vaccine, which requires two doses for full inoculation, began distribution in the United Kingdom last week.The vaccine is the first in the country to use the genetic technology mRNA instead of viral components. Pfizer claimed its trials showed the vaccine was 95% effective at preventing symptomatic COVID-19.The FDA will hold a hearing on Dec. 17 with Moderna, which also developed an mRNA-based vaccine, before possibly giving emergency authorization for its deployment.Moderna said its clinical trials showed the vaccine was 94% effective at preventing the coronavirus and trial patients who had the vaccine had elevated antibodies in their system three months after the vaccines were administered.According to the World Health Organization, there are 52 COVID-19 vaccines in human trials, and 162 vaccines in preclinical development.The vaccine developments come as the U.S. is in the midst of the deadliest period of the pandemic, according to health data. America leads the world with over 16 million cases and close to 300,000 deaths, according to Johns Hopkins University’s Coronavirus Resource Center.The seven-day averages of new daily cases, 211,494, hospitalizations, 106,656, and deaths, 2,427, were at record highs on Dec. 13, according to health data from the COVID Tracking Project.