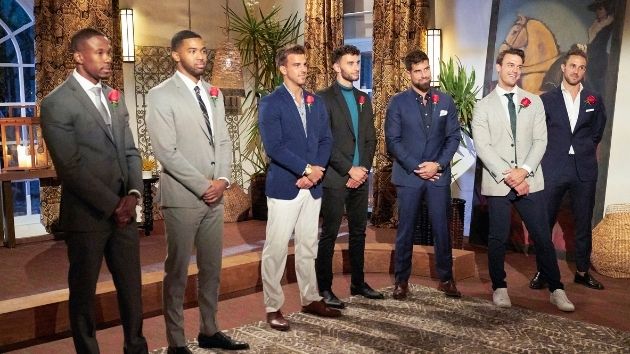 (LOS ANGELES) — Host Chris Harrison gathered some of the most unforgettable men from season 16 on Monday’s “The Men Tell All” episode of The Bachelorette, but first Tayshia had to make some tough decisions of her own — whose families will she meet for the hometown dates.

Hoping to gain some clarity on her relationship with Blake, Tayshia took him a crystal guru to have their crystals and chakras read.  Afterwards, she told him that she wished they had more time to get to know each other before confessing that didn’t think she could “get there” with him.  That led to an emotional goodbye that left Tayshia crouching on the ground in tears as she watched Blake being chauffeured off the resort.

Minutes later, a visibly shaken Tayshia paid the men a visit and pulled Riley away for a private conversation. That led to another gut-wrenching sendoff, as Tayshia explained that, knowing how much taking her to meet his family meant to him, she couldn’t put Riley through that experience if her heart wasn’t “one hundred percent” matching his.

“The longer I sit here, the longer I look at you, the longer I hear you talk, see you smile, the more pain I feel,” he replied stoically, “so, I’m gonna go now.”

Meanwhile, the suitors got an unwelcome surprise when Bennett, whom Tayshia had sent home last week, suddenly reappeared.  Bennett, as you recall, was sent packing following a two-on-one date with him and Noah, to settle the ongoing drama between them that disrupted the competition.

Bennett returned to the resort and paid a surprise late-night visit to the Bachelorette, during which allowed him to wiggle his way back into the competition by declaring his love for her.

That revelation was followed by another bombshell from Chris Harrison, who informed the guys that Tayshia opted to skip the cocktail party and move straight into the rose ceremony because she already decided on who to take to the hometown dates.

Bennett’s surprise return was short-lived, as Tayshia sent him and Noah home, nailing down the four men whose families she would meet.

Ben, 30, an Army veteran from Venice, Calif.Brendan, 30, a commercial roofer from Milford, Mass.Ivan, 28, an aeronautical engineer from Dallas, Tex.Zac C., 36, an addiction specialist from Haddonfield, N.J.

The Bachelorette returns Tuesday at 8 p.m. ET on ABC.