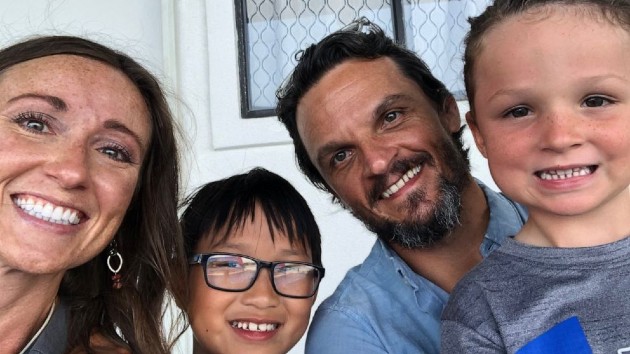 (NEW YORK) — A boy with a rare genetic disease has found a forever home after he was abandoned as a toddler living in China.Earlier this year, Monica and Josh Poynter, of Bowling Green, Kentucky, adopted Trey. The 9-year-old has the same rare, genetic disease as their biological son, Tag, 6. “Tag loves having a brother and Monica and I love having another son,” Josh Poynter told ABC News’ Good Morning America. “It’s hard to put into words what he’s meant to this family.”Both Trey and Tag have severe hemophilia Type A. The disease causes sudden or prolonged bleeding and both boys require lifelong treatment.Tag was diagnosed when he was two days old after spending time in the neonatal intensive care unit. Monica Poynter said she is unaware of any family history of hemophilia Type A.Poynter said that after welcoming Tag, she and her husband struggled for roughly six years with infertility.”After we realized it wasn’t an option to [biologically] grow our family we explored other options,” she added.Poynter said she and Josh were inspired to adopt after reading a story in HemAware — a magazine published by the National Hemophilia Foundation (NHF). In the story, another family adopted a child with hemophilia.Ten years ago, children with hemophilia weren’t eligible for adoption in China and many remained in orphanages due to inadequate care or resources, according to NHF.The Poynters took a foster-to-adopt class and worked with Hand in Hand International Adoptions. In April 2019, they saw Trey’s photo and a video.”He had difficulty walking but he had this biggest smile plastered on his face,” Poynter said, adding that Trey was given a book of photos of her, Josh and Tag.The family traveled to Guangzhou, China, where they finally met Trey face-to-face. At the time, he was using a wheelchair since he had an active bleed due to his disease.”He just had this same, big smile on his face. It was this identifying feature,” Poynter said. “I got that big hug from him … he hugged my husband and his little brother.”Trey no longer uses a wheelchair and is receiving proper medical care.He and Tag love swimming, building Legos and riding bikes together.When adopting Trey, the Poynters leaned on the organization Gift of Adoption, which offers the #RAREis Adoption Fund, to get through financial barriers. The fund was launched specifically to help families adopting children with rare diseases complete adoptions.Poynter calls the adoption process a “grand challenge” but said the emotional and financial support is there for families looking to give a child a home.