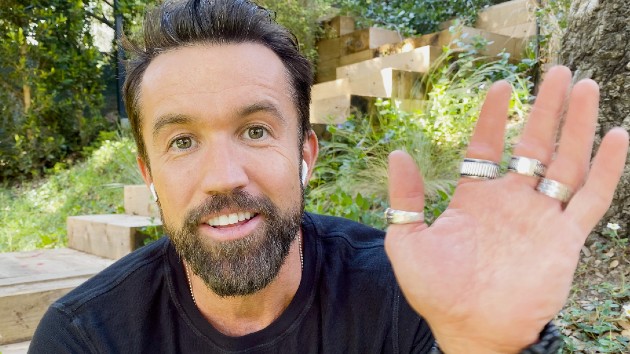 McElhenney in "The Quarantine Episode"/Apple TV+

(LOS ANGELES) — (NOTE LANGUAGE) As previously reported, CBS’ Radford lot in Studio City, California has seen dozens of positive COVID-19 cases; 12 of those on the set of the AppleTV+ show Mythic Quest.

Now some of those who were infected are speaking out to Variety, to slam the show’s producers’ response to the outbreak — the show’s second.

Star and co-creator Rob McElhenney sent an encouraging message to the show’s employees following the outbreak, Variety reports: the message stated, in part, “… to date there remains ZERO evidence of any transmission at work. Our set continues to be one of the safest places you can be outside of your homes.”

Plainly, one of the infected staffers told the trade, “That’s horsesh**. Utter horsesh**.”

Another commented that new COVID protocols were being followed at first, but as the pressure grew to finish the season and “get everybody off CBS Radford,” the safety slipped.

The infected employee added, “This is our m.o. — get it done…But we can’t go on standard operating procedure because people are getting sick.”

He added, “Not a single person is surprised this spread like it did,” the staffer said.

McElhenney told Variety the show was in compliance according to the company charged with overseeing the production’s COVID rules. He said, “Our medical staff has made every effort to ensure the health and safety of our crew…As all productions are seeing, it’s impossible to mitigate one hundred percent of the risk. …We will continue to follow the science and work in the safest way possible.”

Ironically, in May, a special installment of the Apple TV+ workplace comedy, called “The Quarantine Episode,” was shot remotely by cast members on iPhones, with couriers later picking up and sanitizing each device before the footage was edited.

In Brief: ‘Atlanta’ drops trailer for final season, and more