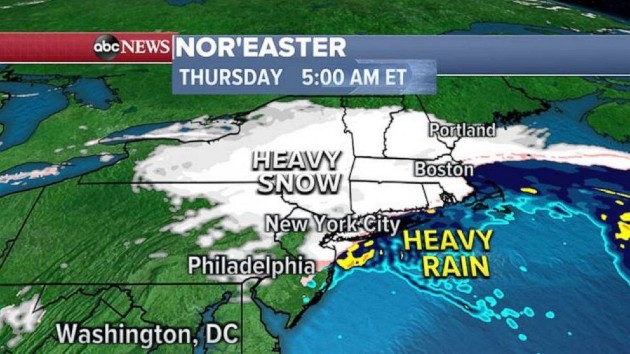 Deadly snowstorm to be followed by freezing temperatures in Northeast: LatestBy EMILY SHAPIRO, MAX GOLEMBO, and MELISSA GRIFFIN, ABC News(NEW YORK) — A deadly snowstorm is slamming the Northeast, closing schools and dropping nearly 4 feet of snow in some areas.The latest:Two people were killed after weather conditions led to a pileup of dozens of cars in Clinton County, Pennsylvania, on Wednesday night.New York state saw two fatalities and about 600 car accidents, Gov. Andrew Cuomo said.In New Jersey, the storm delayed some vaccine deliveries, Gov. Phil Murphy said.Murphy said he was “not aware of any place that was expecting it that won’t get it” because of the storm. “It just may be a little later than otherwise expected.”The highest snowfall total was 44 inches, reported in Newark Valley, New York, and in Ludlow, Vermont.Binghamton, New York, reported 42 inches, half of the city’s yearly snowfall, in less than 24 hours as snowfall rates reached 5 inches per hour.With 10 inches of snowfall, this marks New York City’s biggest snowstorm since January 2016.In Manhattan, outdoor dining is scheduled to resume Thursday night. Indoor dining had been banned starting on Monday because of COVID-19.Albany, New York, saw 22.7 inches, while Boston and Hartford, Connecticut, reported 12.5 inches.New York City and Boston canceled in-person learning Thursday.The forecast:The nor’easter is wrapping up Thursday afternoon, with some lingering snow expected from Long Island into New England.A few more inches could fall from Vermont to Maine.Behind the storm is a cold front, which will keep the snow from melting. Black ice will be a major threat over the next week because temperatures will fall well below freezing overnight.The wind chill — what it feels like outside — could fall to 15 degrees in New York and 11 degrees in Boston on Friday.Saturday will be even colder, with wind chills at 14 degrees in New York and 4 degrees in Boston.