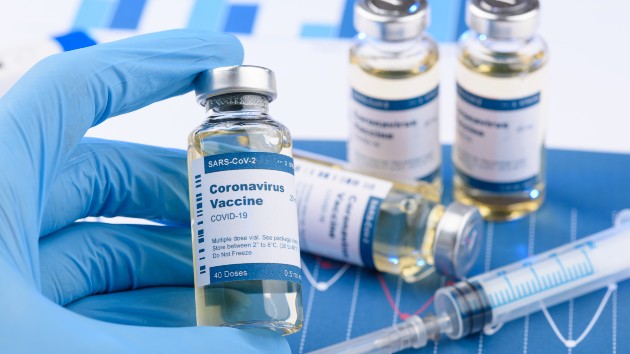 (WASHINGTON) — The U.S. is on the cusp of a second vaccine for COVID-19, with independent federal advisers set to review data Thursday from Moderna that suggests its two-dose vaccine is safe and 94% effective.An endorsement from the panel paves the way for an official green light by federal regulators to begin distributing next week some 5.9 million Moderna doses to the nation’s front-line health care workers and nursing home residents.The Moderna batch would be in addition to the 6.4 million doses provided by Pfizer-BioNTech that started to roll out this week after being the first to get emergency authorization.Dr. Anthony Fauci, the nation’s top infectious disease expert, said Wednesday that people shouldn’t be concerned about having to choose between Moderna and Pfizer. An internal assessment by the U.S. Food and Drug Administration already found that the Moderna data show the benefits likely outweigh the risks.“Moderna certainly will be available soon and have the same level of efficacy … the same safety profile and virtually everything the same about that. So it wouldn’t make much difference which of those you take,” Fauci told CNBC’s Health Returns.One primary difference is that Modern requires fewer specific handling instructions because it does not require ultra-cold storage conditions like the Pfizer-BioNTech vaccine.Moderna also is seeking authorization for ages 18 and older, whereas Pfizer’s enrollment of older teens in trials this fall paved the way for authorization of anyone 16-plus.Following last week’s authorization, Pfizer began shipping the first batch of 2.9 million doses across the country.Which sites get the first doses are being decided by state governors and health departments. As recommended by an ethics board, hospitals have been first in line, injecting front-line workers most likely to come in contact with the virus.Nursing homes also are the priority, although they have been slower to roll out shots because they rely on CVS, Walgreens and other pharmacies that say the logistics are considerable to ensure no dose is wasted.Florida and West Virginia were among the first to host vaccine clinics at nursing homes on Wednesday, with a nationwide rollout at long-term care facilities expected on Monday.By February, it’s expected that other seniors living independently — anyone over age 65 — will be able to ask their pharmacy for a vaccination.“Our plans is to be able to immunize 100 million of these people (with) those vaccines by the end of the first quarter of the year 2021, somewhere during the month of March,” Moncef Slaoui, Trump’s top science adviser in the vaccine effort, told CNBC.A third vaccine also is on the horizon. Johnson & Johnson was expected by early January to know whether its vaccine was effective. If that vaccine comes online as well, that “will help us accelerate even faster coverage of that population,” Slaoui said.Estimates for the broader population remains March or April, with immunizations complete by June.“By the time we get into mid, fall of 2021, we can be approaching some level of normality,” he said.“I would think that would be things like being able to go to theaters, clearly feeling much more comfortable about school, having restaurants open to indoor dining,” Fauci said.Copyright © 2020, ABC Audio. All rights reserved.