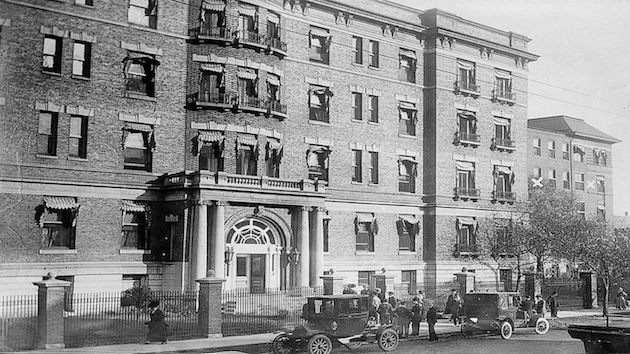 (CHICAGO) — Mercy Hospital survived the Civil War and the Great Depression and treated patients during the Great Chicago Fire of 1871.

It is a safety-net hospital, serving the poor on the city’s South Side.

Yet, amid the coronavirus pandemic and the unprecedented challenges that presents, the hospital, the city’s oldest, is looking to shut down and reopen as an urgent care center.

Critics say the end result would be devastating to the neighborhood and the people it serves — with the nearest emergency department at least 5 miles away if the deal were to be approved.

At the conclusion of a “long and brutal” meeting, the six-person Illinois Health Facilities and Services Review Board unanimously voted this week to deny the hospital’s proposal. Following Tuesday’s decision, Mercy Hospital executives have 14 days to appeal, as well as the opportunity to present the board with a new plan.

“I do not believe Mercy has made a reasonable case that [withdrawing] their services will not have an extremely negative impact on the South Side of Chicago,” board member Dr. Linda Rae Murray said before casting her “no” vote Tuesday.

“As a public health person, I am really distressed that this is going on in the midst of a global pandemic.”

A spokesperson for Mercy Hospital told ABC News in a statement that they were disappointed with the board’s initial verdict.

“We will look forward to going before the board again in early 2021 with our plans to discontinue inpatient services at Mercy Hospital and transition to an outpatient model to serve residents on the South Side of Chicago.”

The nearly five-hour review board meeting, which included emotional testimony from community members, politicians, organizers, health care workers and executives from Trinity Health, which runs Mercy, showcased a stark divide over the future of hospital, which in the proposed plan is slated to close in 2021.

On one hand, South Side community members and doctors argued that closing Mercy would worsen health care access for the hospital’s predominantly Black patients. On the other, Trinity executives said the hospital was losing money and that replacing it with an urgent care clinic and laboratory testing would benefit the community.

A safety-net hospital struggles to survive

Patients at safety-net hospitals tend to be people of color, poor, old and either uninsured or on Medicaid. That’s true at Mercy, where according to a 2019 community needs assessment by the Alliance for Health Equity, “between 80% and 90% of the population served by Mercy are economically challenged, underserved, underprivileged and uninsured.”

In 2019, more than half of Mercy’s inpatient visits were from Medicaid patients, according to state records, which are reimbursed by the government at a lower rate than what hospitals earn from patients with employer insurance.

Despite those financial factors, when Trinity Health, the fifth-largest health care system in the country, purchased Mercy in 2012, it was profitable, with assets exceeding liabilities by $140.8 million, according to the board’s report.

In 2014, the hospital started losing money, according to tax documents. By 2017, Mercy was in the red.

Trinity looked to sell, John Capasso, a Trinity executive vice president, testified on Tuesday. The potential buyers all either lacked the expertise to run a hospital or the funding, he said. When they couldn’t find a buyer, Trinity looked to merge Mercy with three other struggling hospitals on the South Side, asking the state to chip in $520 million over five years.

Illinois state Rep. Lamont Robinson is part of the Illinois General Assembly, which heard the South Side hospitals’ merger request earlier this year and turned it down.

“The media continues to say that the elected officials failed to fund the plan,” said Robinson, whose district includes Mercy. “We didn’t say ‘no,’ we just asked for more information. They laid out the plan and could not tell us where the new hospital was going to be built,” he said. “This was a half-baked plan.”

That information never materialized, Robinson noted. Instead, Mercy announced it was closing.

Mayor Lori Lightfoot addressed Mercy’s potential closure during a press conference in Chicago Tuesday. “Our safety-net hospitals have been faced with a number of different challenges, really for years, but particularly in this time of the pandemic,” Lightfoot said. “My hope is that the legislature will take this up to get back on track and provide support to the safety-net hospitals,” she added.

“If everybody closed down every hospital or clinic because of the neighborhood or the return, we wouldn’t have hospitals or clinics in important neighborhoods,” said Dr. David Ansell, senior vice president for community health equity at Rush University Medical Center in Chicago.

“If you were really thinking about it from a community health view, never in a million years would you close Mercy,” Ansell said. “I’m not saying it’s easy to navigate a turnaround. But it didn’t seem like they even tried it.”

A future without Mercy

If Trinity’s plan to close Mercy succeeds, the hospital will join the ranks of at least 21 hospitals nationwide that have closed this year, many of which are struggling with declining patient numbers and financial damage from the pandemic, according to Becker’s Hospital Review. In Chicago, three hospitals have closed on the city’s South and West sides since 2018, ABC News’ Chicago affiliate WLS-TV found.

The plan outlined by Mercy president and CEO Carol Schneider, would have closed the hospital and offered walk-in urgent care, basic imaging services like mammograms and care managers who could connect patients to doctors for follow-up care.

“It’s fragments of a medical care system,” Murray told Schneider during the review. “I’m a little perturbed that this is being framed as a new model of care.”

And Ansell noted that it’s less a matter of the beds than the services that surround the hospital. In addition to its emergency department that sees upwards of 57,400 patients a year, Mercy runs a pediatric clinic, physical therapy, oncology, hematology and a maternity ward. It’s also a teaching hospital where residents who want to work with underserved communities train to be doctors.

If Mercy were to close, the nearest emergency room is some 5 miles away. “I am a Black person. I have family that lives on the South Side,” Jessica Simpson, a second-year medical student at Loyola University Chicago, told ABC News.

“If someone is experiencing trauma, like stroke, heart attack or a car accident, every minute counts.”

For Illinois state Rep. Theresa Mah’s constituents in Chicago’s Chinatown, many of whom are immigrants and seniors, transportation is a barrier to health care. Mercy closing would create even more barriers. It would also impact her constituents who are employed by the hospital and who could lose their jobs during a pandemic.

“The economic engine of Mercy is huge,” Ansell said of Mercy’s roughly 1,700 employees and their families. “You wouldn’t allow a Ford factory of 2,000 workers to just up and leave the city.”

Since the summer, hospital employees, community members and elected officials have protested, waving “Have Mercy On Mercy” and “People Over Profits” signs during demonstrations.

Simpson, who founded her school’s chapter of White Coats for Black Lives (WC4BL), a racial justice group, worked to get other medical students involved. Last week’s WC4BL newsletter advertised a “Mercy Week” of activism organized by residents, including a prayer vigil, outdoor sit-in and demonstration at city hall.

Rep. Robinson is convinced that he can find a buyer for Mercy.

Robinson said that he and Gov. J.B. Pritzker were in talks with a local hospital about taking over Mercy with the help of state funding, he said, declining to disclose the name of the hospital. “A ‘no’ vote allows the governor and I the opportunity to put a plan together and support a new entity that will be able to take over for Trinity,” he added.

Jordan Abudayyeh, Pritzker’s press secretary, told ABC News that the governor had communicated his position to Trinity’s CEO. “The company [should] urgently rethink the decision to close Mercy Hospital,” Abudayyeh said in a statement. “The state stands ready and willing to work with them to avoid closure.”

Abudayyeh pointed to the administration’s public objection to Mercy’s closure during Tuesday’s review board meeting. “The administration has also directed Trinity Health to review all viable offers to purchase the hospital so it can continue to serve the community by operating as a hospital,” she said.

But like many states, Illinois faces a budget crisis this year, made worse by the pandemic. Even with a potential buyer, Mercy’s road forward isn’t an easy one. If Trinity appeals and is rejected by the board for a second time, they could potentially take the state to court or pay fines for closing without approval.

“As you know, there is a radical difference in life expectancy within the City of Chicago when comparing prosperous neighborhoods with some communities on the South Side,” Edward Green, an attorney for Mercy, wrote in a July letter requesting the closure of the hospital.

An analysis by NYU researchers last year found a 30-year life expectancy gap between segregated white and Black neighborhoods in Chicago — the biggest disparity across neighborhoods of any city in the country.

Saving Mercy won’t solve the difficult economics of running a hospital in a neighborhood of concentrated disadvantage and poverty, Ansell said. “Segregation sets these hospitals up for failure.”

“There are structural gaps in the way of easy solutions,” he said. “One the other hand, closing a hospital in a Black neighborhood in Chicago that’s highly revered and functioning is an intolerable solution,” Ansell added.

“They have to pursue an alternative and do it in good faith.”

Mom becomes surrogate at 49 for daughter, gives birth to baby at 50

If you’re still waiting for herd immunity for COVID-19, it’s time to move on: Experts