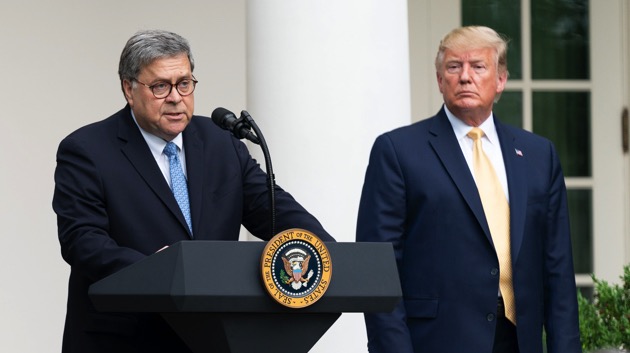 By LUKE BARR, ABC News(WASHINGTON) — Attorney General William Barr said Monday he has seen no reason for a special counsel to investigate possible fraud in the November election, contradicting an idea proposed by President Donald Trump.Barr, who is set to step down on Wednesday, said, “If I thought a special counsel was appropriate,I would name one, and I haven’t.””I said there was not enough fraud to affect the election and I stand by that,” he said.Barr also said there is no federal authority to seize voting machines used in key states, as Trump’s personal attorney, Rudy Giuliani, has suggested he order.“I see no basis now for seizing machines by the federal government, you know, a wholesale seizure of machines by the federal government,” he said.During a Friday meeting with Trump at the White House, a source said, Guiliani, lawyer Sydney Powell and retired Gen. Michael Flynn discussed an executive order to seize and examine voting machines across the country.Trump invited Powell to consider the possibility that she be appointed a special counsel and be given high-level security clearances to investigate the 2020 election. The meeting was highly contentious, sources told ABC News, filled with screaming and demands from Powell, who called other Trump aids “quitters” for giving up the fight.The meeting ended with White House chief of staff Mark Meadows, White House counsel Pat Cipollone and other Trump attorneys talking the president out of making the offer, the sources said. Giuliani, who joined the meeting by phone, also opposed the idea, according to sources.Powell did not respond to ABC News’ request for comment. She was at the White House Sunday as well, but the reason was unclear.Barr’s candid comments came when he answered reporters’ questions at an unrelated news conference.Copyright © 2020, ABC Audio. All rights reserved.