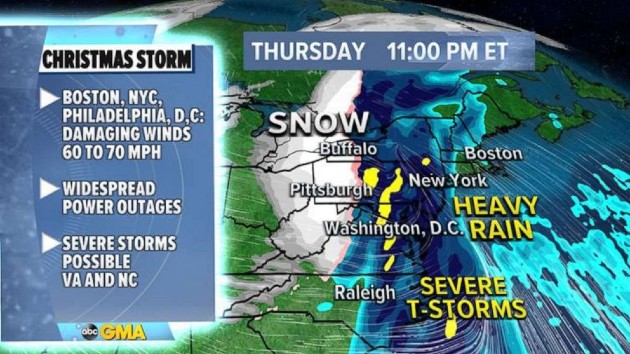 (NEW YORK) — The Christmas week storm is on the move, and is crossing the West Tuesday with damaging winds and heavy snow for the Rocky Mountains.On Monday night, the first snow of the season fell in Seattle. Parts of Washington saw up to 9 inches of snow, which caused accidents and spinouts on the roads.Winds have gusted up to 60 mph from Washington to Montana and Wyoming.On Tuesday, the storm will move through the Rockies with winter alerts stretching from Colorado to Montana, where some areas could see as much as 30 inches of snow.An avalanche warning and a high wind warning have been issued for the areas, and winds could gust as high as 70 mph.On Wednesday, the storm will move into the Central U.S. and stretch from the Gulf Coast to the Great Lakes.For the Gulf Coast, severe thunderstorms are possible with damaging winds, and there is even a chance an isolated tornado will hit.A winter storm watch has already been issued for the Dakotas, Minnesota and northern Iowa, where blizzard conditions are possible due to strong winds near 60 mph and blowing snow.On Christmas Eve, the storm will move into the Northeast and the East Coast with widespread damaging winds and heavy rain from Washington, D.C., to Boston. Widespread power outages may occur.In the South, from Florida to the Carolinas and southern Virginia, severe thunderstorms are possible with damaging winds and an isolated tornado.Behind the storm, cold air will change the rain to snow for western New York, Pennsylvania and into parts of Ohio, where some areas could see up to a foot of snow. A winter storm watch has already been issued.The first widespread Arctic outbreak is expected to arrive behind the storm. Temperatures will likely drop below zero degrees in the Upper Midwest and the Great Lakes with wind chills in the 30s and 20s below zero in the Dakotas, Minnesota and Wisconsin. Wind chills could even dip below zero in Chicago by Christmas Eve.This Arctic air will move to the East for Christmas night and into the day after Christmas, with temperatures that will tumble well below freezing all the way to Georgia. Even sunny Florida is set to experience wind chills.Copyright © 2020, ABC Audio. All rights reserved.