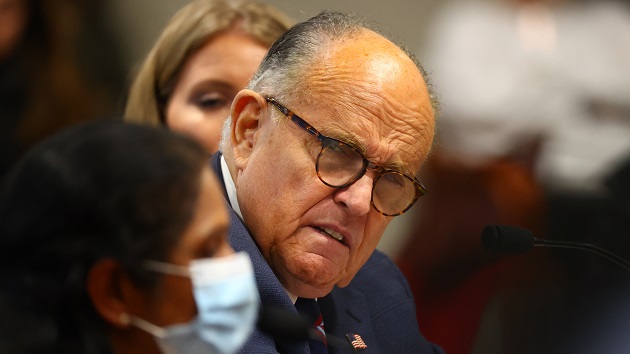 By KATHERINE FAULDERS and AARON KATERSKY, ABC News(NEW YORK) — Federal prosecutors in New York are considering pursuing the electronic communications of Rudy Giuliani, President Donald Trump’s personal attorney, as part of an ongoing investigation into Giuliani’s business dealings with two indicted businessmen, two sources familiar with the matter told ABC News.The consideration was first reported by NBC.It’s not immediately clear what prosecutors in the Southern District of New York hope to glean from the correspondence, but Giuliani’s business dealings with former associates Lev Parnas and Igor Fruman have been under federal investigation since Parnas and Fruman were arrested last fall while trying to leave the country.ABC News has previously reported that just after the election, Giuliani asked President Trump for a preemptive pardon, according to sources. News of the potential preemptive pardon was first reported by The New York Times, after which Giuliani responded on Twitter by calling the story “#fakenews.”A search warrant for Giuliani’s email and other electronic communications would likely require approval from Justice Department officials in Washington, who would likely have wanted to avoid such authorization before Election Day due to a longstanding Justice Department policy intended to prevent elections from being impacted by overt investigative actions.A spokesman for the U.S. Attorney’s office for the Southern District of New York declined to comment on the matter.Parnas and Fruman last month pleaded not guilty to charges that they conspired to commit fraud using a company called Fraud Guarantee, which purported to insure investors against corporate fraud. Federal prosecutors said the two Soviet-born, Florida-based businessmen misled investors about the strength of the company and what would be done with their money.Parnas had hired Giuliani to consult with Fraud Guarantee for $500,000. Giuliani has denied any wrongdoing.A judge pushed back the trial date for Parnas and Fruman, which had already been delayed to March, until later in 2021.Copyright © 2020, ABC Audio. All rights reserved.