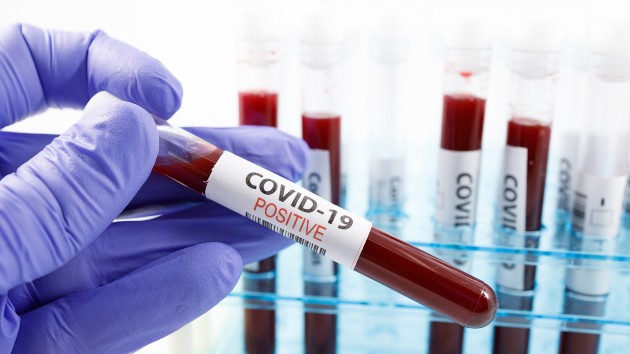 By ROSA SANCHEZ and EMILY SHAPIRO, ABC News(NEW YORK) — A pandemic of the novel coronavirus has now infected more than 77.5 million people worldwide and killed over 1.7 million of them, according to real-time data compiled by the Center for Systems Science and Engineering at Johns Hopkins University.Here’s how the news developed Tuesday. All times Eastern:

Dec 22, 6:39 pmUS COVID hospital patients reach spring peak: HHSAbout 24% of inpatients in U.S. hospitals have the coronavirus, matching the peak set in April, according to an internal memo from the U.S. Department of Health and Human Services that was obtained by ABC News.About 29% of hospitals across the country have more than 80% of their ICU beds filled, according to the memo.HHS said 34% of ventilators in use are occupied by COVID-19 patients. The peak in April was 45%, according to the agency.The memo also reported increasing trends with cases and deaths across the country between Dec. 16 and Dec. 22.During that seven-day period, 1,656,411 new cases were confirmed, according to HHS. This was a 10.8% increase from the previous seven-day period.There were 18,537 deaths recorded between Dec. 16 and Dec. 22, which was a 7.5% jump from the same period last week.-ABC News’ Josh Margolin contributed to this report.

Dec 22, 4:40 pmAstraZeneca says its vaccine should be effective against new coronavirus variantBritish drugmaker AstraZeneca told Reuters that its vaccine should be effective against the new COVID-19 variant linked to cases in the United Kingdom.AstraZeneca said studies are underway to fully probe the impact of the mutation.ABC News’ Sohel Uddin contributed to this report.Dec 22, 2:52 pmSupreme Court justices have vaccine accessVaccines are being made available to all Supreme Court Justices, spokeswoman Kathy Arberg told ABC News.Arberg did not say whether any justices have received the vaccine, citing health privacy laws. The oldest justices are Stephen Breyer, 82, and Clarence Thomas, 72.The National Security Council in recent days moved to extend vaccine access to top government officials to preserve continuity of government. ABC News’ Devin Dwyer contributed to this report.

Dec 22, 1:02 pmNew York hospitals to test for UK variantNew York Gov. Andrew Cuomo is instructing hospitals across the state to test specifically for the variant of the coronavirus discovered in the United Kingdom.“If we find the variant, we want to know where it is immediately,” Cuomo said.  Cuomo said he does not support a travel ban from the U.K. into the U.S., but does believe the U.S. should follow New York state’s lead in requiring flights originating in the U.K. to have passengers test negative. Dr. Anthony Fauci told ABC News’ Good Morning America Tuesday that “the possibility and maybe the likelihood of requiring the testing of individuals before they board a plane to the United States — that is under active discussion.”Fauci added, “you really need to assume” that the variant is already in the U.S.

Dec 22, 12:40 pmSouth Carolina’s governor tests positiveSouth Carolina Gov. Henry McMaster has tested positive for COVID-19 and is experiencing “mild symptoms with a cough and slight fatigue,” his office said.His wife, Peggy McMaster, tested positive last week and does not have symptoms.”There is no way to pinpoint precisely when or how Governor McMaster or the First Lady contracted the virus,” the governor’s office said, citing state physicians.“The governor quarantined himself when he knew he was in close contact with the virus and sent Governor’s Residence staff home to quarantine and get tested to ensure their health and safety,” his office said. “Because the governor followed the guidelines and recommendations as a ‘close contact,’ SCDHEC [the state’s health department] has determined there are no ‘close contacts’ to the governor.”The governor is isolating at home and will receive monoclonal antibody treatment on Tuesday, his office said.Dec 22, 12:08 pmCDC says UK variant not detected in sequencing efforts in US The Centers for Disease Control and Prevention said it hasn’t detected the coronavirus variant found in the United Kingdom, with the caveat that an extremely limited number of COVID-19 cases in the U.S. have been sequenced.  While there’s evidence the variant could potentially be more transmissible, the fact that it is more predominant in a particular country or area doesn’t mean it’s more infectious and there’s no evidence it causes more severe illness, according to the CDC. Beginning in January, each state will send at least 10 COVID-19 samples biweekly to the CDC for sequencing and further characterization.

Dec 22, 12:04 pmDecember on track to become deadliest month of pandemicWith over 51,000 coronavirus-related deaths recorded in the first three weeks of the month, December is on track to surpass April to become the deadliest month of the pandemic in the U.S., according to ABC News’ analysis of data compiled by the COVID Tracking Project.Hospitalizations are surging to unprecedented levels, with 115,351 patients currently hospitalized nationwide — a 38.5% increase in the last month.December is also set to become the worst month on record for COVID-19 cases in the U.S. The U.S. surpassed 18 million cases on Monday, only four days after reaching 17 million cases, according to data collected by Johns Hopkins University. Dec 22, 11:43 amEuropean Commission recommends end to UK travel banThe European Commission is recommending an end to the United Kingdom’s travel ban in the wake of coronavirus cases in England linked to a new variant of the virus.The Commission said, “while it is important to take swift temporary precautionary action to limit the further spread of the new strain of the virus and all non-essential travel to and from the UK should be discouraged, essential travel and transit of passengers should be facilitated. Flight and train bans should be discontinued given the need to ensure essential travel and avoid supply chain disruptions.”France and several other countries closed their borders to Britain on Monday over fears of the new variant.While the France-England border is closed for U.K. citizens, French citizens can come home from Britain if they have proof of a negative COVID-19 test, France’s BFM television reported on Tuesday.

Dec 22, 10:37 amFauci gets vaccinatedDr. Anthony Fauci, Health and Human Services Secretary Alex Azar and National Institutes of Health Director Francis Collins were vaccinated Tuesday with the newly authorized Moderna vaccine, which the NIH helped develop.Azar said to the NIH staff, “This is one of your finest accomplishments.”

The European Commission is recommending an end to the United Kingdom’s travel ban in the wake of coronavirus cases in England linked to a new variant of the virus.The Commission said, “while it is important to take swift temporary precautionary action to limit the further spread of the new strain of the virus and all non-essential travel to and from the UK should be discouraged, essential travel and transit of passengers should be facilitated. Flight and train bans should be discontinued given the need to ensure essential travel and avoid supply chain disruptions.”

Hours before getting vaccinated, Dr. Anthony Fauci told ABC News’ Good Morning America Tuesday, “I want to symbolize to people the importance that everyone gets vaccinated who can get vaccinated.”

Fauci said the general population will likely start receiving vaccines at the end of March or beginning of April — but it’s unclear how long that process will take.

“It may take two, three, four months or more before you get everyone vaccinated that wants to be vaccinated,” Fauci said.In the wake of an uptick in cases in England linked to a new COVID-19 variant, Fauci said he “would not be surprised” if the variant is in the U.S.“When you have this amount of spread within a place like the U.K., you really need to assume that it’s here already. And certainly is not the dominant strain, but I would not be surprised at all if it’s already here,” he said.The reproduction rate of the new variant is 0.4 higher than other known strains, Dr. Maria Van Kerkhove, the World Health Organization’s COVID-19 technical lead, said Monday. That means the number of people an infected individual transmits to increases from 1.1 to 1.5 with the new variant.There’s “zero evidence” that the new variant causes more severe disease, said Dr. Mike Ryan, executive director of the WHO’s Health Emergencies Programme.

Dec 22, 5:10 amBioNTech vaccine will likely work on UK variant, company’s CEO saysBioNTech CEO Ugur Sahin is confident that the pharmaceutical company’s coronavirus vaccine will work against the new U.K. variant of the virus.”We don’t know at the moment if our vaccine is also able to provide protection against this new variant,” Sahin told a news conference Tuesday, after the vaccine was approved for use in the European Union. “But scientifically, it is highly likely that the immune response by this vaccine also can deal with the new virus variants.”He explained that the proteins on the U.K. variant are 99% the same as the ones on the original strain, so BioNTech has “scientific confidence” that its vaccine will be effective on the variant as well.Still, more studies need to be done.”But we will know it only if the experiment is done and we will need about two weeks from now to get the data,” Sahin said. “The likelihood that our vaccine works … is relatively high.”

Dec 22, 1:45 amOver 60 arrested at superspreader events in LA CountyLos Angeles officials arrested over 60 people involved in underground parties over the weekend. In a statement, the Los Angeles County Sheriff’s Department said the parties were considered superspreader events, as they violated COVID-19 health protocols.Around 10:45 p.m. Saturday, the Los Angeles Police Department responded to an underground party event in Los Angeles and found two people shot. One of the victims was pronounced dead at the scene, according to a statement from the LASD.  Then, at around 12:30 a.m. Sunday, officers responded to another underground party in Compton, where they arrested 67 people: 61 adults and six juveniles. One firearm was recovered.  A third underground party, located in Los Angeles, was shut down by the LAPD after a shooting took place. “Sheriff Alex Villanueva has made it clear he will seek out and take law enforcement action against all underground party events occurring anywhere within Los Angeles County, who fall under the Health Orders of the County’s Department of Public Health,” the LASD said in their statement. “The goal of these enforcement actions is to reduce the spread of COVID-19 and the risk to our vulnerable populations.”

Dec 22, 1:09 amBiden applauds COVID relief package but says more work is neededPresident-elect Joe Biden has applauded the COVID-19 relief bill passed Monday by the House and Senate. In a tweet early Tuesday morning, Biden voiced his approval of the package, but warned that Congress still has more work to do in the new year. “I applaud this relief package, but our work is far from over. Starting in the new year, Congress will need to immediately get to work on support for our COVID-19 plan. My message to everyone out there struggling right now: help is on the way,” he tweeted.Copyright © 2020, ABC Audio. All rights reserved.