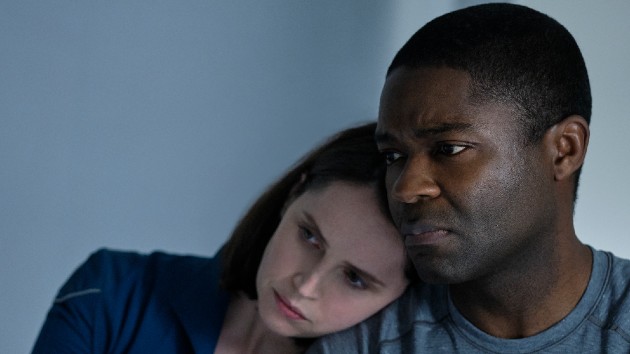 In the film, Jones plays Sully, an expectant mother and astronaut on a mission in space. Jones, who was pregnant during the filming of the project, tells ABC Audio that it was “very cool of Clooney” to not “CGI [out her] bump” out of his film.

“[He] just made it a much more truthful experience to embrace what was actually happening,” she says, noting that Clooney thought it was “much more interesting to embrace [her] pregnancy, and not run away from it.”

“And [to] make it part of the story,” she continues. “And so, that definitely made my life much easier rather than… walking around hoping no one notices that I’m pregnant.”

Oyelowo, who plays Commander Gordon Adewale, a fellow astronaut and Sully’s partner, agrees, adding that both he and Felicity “are testament to George Clooney’s embrace of the people who he invites to work with him.”

“He embraced Felicity’s pregnancy, which was not in the script,” says Oyelowo. “[And] me asking him if I could change my character’s name to a Nigerian name because he was originally Commander Harper, not Commander Adewale.”

Oyelowo says having that representation was extremely important to him.

“I wanted to be able to depict someone of African descent who was being part of that in relation to this film, because I knew how much pride that would fill me with, how much I would have loved to have seen that in films in the past,” he says. “And how much that would speak to Africans and just people of color all over the planet to see that level of contribution depicted in this film.”

The Midnight Sky is available on Netflix.