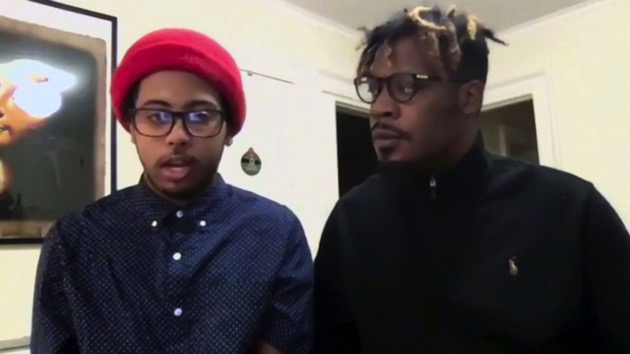 By KELLY MCCARTHY and SABINA GHEBREMEDHIN, ABC News(NEW YORK) — In the wake of a now-viral incident where a woman accused a Grammy-winning Black jazz musician’s teenage son of stealing her cell phone in a hotel lobby, the parents and their son described how the confrontation left them “shell-shocked.””I’ve been confused. I mean, don’t know what would’ve happened if my dad wasn’t there, honestly,” Keyon Harrold Jr. told Good Morning America on Tuesday. “These past few days, still kind of shell-shocked. But I’m hanging in there.”The 14-year-old spoke out for the first time on GMA, alongside his father Keyon Harrold, his mom Kat Rodriguez and their attorney Ben Crump.When asked to think back to how he felt in the moment when the chaos unfolded, Harrold Jr. said, “I was confused because I’ve never seen that lady ever and I didn’t know what to do at the moment — that’s why I was happy to have my dad there to help me.”The incident captured on video on Dec. 26 in the lobby of the Arlo Hotel in Manhattan’s SoHo neighborhood, showed Harrold with his son defending themselves against an unidentified woman who repeatedly demanded he “give it back” — apparently referencing her cell phone.Harrold told GMA that physically, the woman “was all on him asking for his phone immediately” once they got down to the lobby.”But after the video cuts off and, I mean, she basically tackled, she scratched me, and I was there to, you know, try to protect my little cub,” he said. “And basically trying to keep her away, keep her off of my son. I couldn’t imagine what it would have been like if I wasn’t there to be with him.”Rodriquez, who was not there at the time, told GMA that she feared the possible alternative outcomes if Harrold Jr. had not had a parent by his side.”Fear came in because my son, if his father wouldn’t have been there, what would have happened to my son if the cops would have been called,” she said. “When my son asked me, ‘why me, mom?’ That just hurt.”The toughest answer that a parent has to give their child — unfortunately it might be because you’re Black. It might be because you’re no longer seen as a child. When you look at him, he looks like he could be 16 or 17. But when you hear him speak, he’s a 14-year-old boy,” Rodriguez said.A hotel manager got involved as the woman became more emphatic, but the artist claimed the manager sided with the woman, who was not a current guest at the hotel.The Arlo Hotel later said in a statement that they apologized for how the dispute was handled and said that they have reached out to the family. Crump told ABC News that the phone in question was later returned by an Uber driver after the owner left the phone in the car, and he is petitioning Manhattan District Attorney Cy Vance Jr. to bring charges against the woman who allegedly attacked Harrold and his son.The family’s attorney told GMA that they are petitioning the Manhattan District Attorney Cy Vance Jr. “to bring charges against this woman for assault and battery.””We want charges because we have to send a message because this has larger society implications,” Crump said. “Think about how many Black men have been falsely accused by these Karens and they end up losing their liberty and losing their life sitting in prison.”The term “Karen” took on a new meaning in 2020 stemming from multiple racially charged incidents involving women calling the police on Black men. The moniker has come to signify white women acting entitled and has sparked thousands of memes. The term has been around for several years, with the origin largely unknown.The NYPD said it is investigating the incident.Harrold Jr. said that if he were to speak with the woman again he would first, “expect an apology.””I would ask her why would she do something like this to a kid who has never met you at all and I would just ask just why,” he added.Rodriguez echoed the same rhetorical question, “I want to know why.””The whole point is why — we don’t have any clue why this woman attacked our son,” she said.