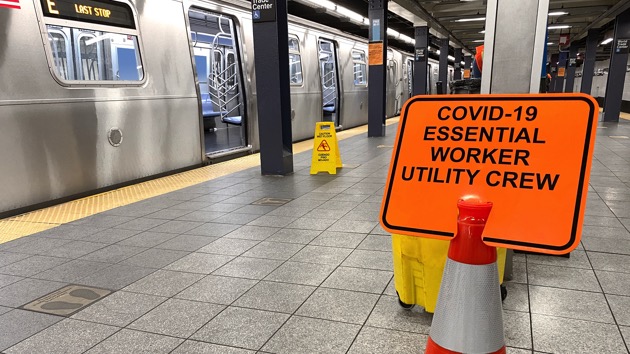 By DEVIN DWYER and SARAH HERNDON, ABC News(NEW YORK) — As the curtain falls on 2020 and the Trump administration, America’s infrastructure system is mired in a financial crisis that the coronavirus pandemic is only making worse. With fewer travelers at airports and on toll roads, the taxes and user fees that governments rely on to fund repairs aren’t coming in. Less rush-hour gridlock may be a pandemic silver lining, but fewer drivers are filling up and paying the gas taxes that help the Highway Trust Fund for repairs. Cash-strapped local governments are putting some much-needed upgrades on hold or canceling them altogether. “You’ve got municipal and state budgets that are starting to buckle under these unprecedented demands, meaning less support available for our parks and schools and other public services beyond infrastructure, precisely at a time when we need to be investing in it,” said Tom Smith, executive director of the American Society of Civil Engineers. The to-do list of repairs is staggering: $177 billion needed for the electrical grid; $42 billion for aging airports; and $1.1 trillion for crumbling roads and structurally deficient bridges, according to an analysis by ASCE.

Subways, commuter rail and bus lines — which were under financial strain before COVID-19 — are now hundreds of millions of dollars in debt and bracing for deep cuts .”It’s the hardest thing I’ve ever had to deal with,” said Paul Wiedefeld, CEO of the Washington Metropolitan Transit Authority, the nation’s second-busiest transit system behind New York City. “I ran BWI [airport] right after 9/11. I dealt with a lot of issues, but this is unbelievable,” he added. In the nation’s capital, rail ridership is down 90% and bus passengers are down 60%.”When you look at New York, Chicago, Philadelphia, San Francisco, Boston, they’re all in the same place. They’re getting to that same point we are, which is, we’re facing huge financial challenges,” Wiedefeld said. “And until this thing’s really under control, people aren’t coming back. “New York’s MTA faces an $8 billion deficit through 2024. In Chicago, transit officials are forecasting a $500 million deficit, while in Boston $600 million. Major metro transit agencies have warned of more layoffs, service cuts, station closures and reduced frequency of trains and buses. “We have a tremendous backlog when it comes to transit,” Smith said. In its massive year-end stimulus bill, Congress approved $14 billion in emergency relief for public transit, which major cities said would delay deeper service cuts and layoffs if President Donald Trump signed it into law. “It’s a down payment, an important down payment on what’s going to have to be done beginning at the end of January into February,” said President-elect Joe Biden of the plan.

Economists say the quagmire for public transit could threaten the nation’s broader financial recovery, as businesses rely on transportation systems to bring back workers, shoppers and tourists. Weidefeld said he expects the ridership and revenue crisis to last “definitely months” longer. “Let’s see how the vaccine plays out, both in terms of its acceptance and its reliability,” he said. Some of the nation’s most urgently needed infrastructure repairs are for America’s roads and bridges. More than 56,000 American bridges — roughly 1 in 10 — are structurally deficient and in need of major overhaul or replacement, according to ASCE’s 2017 Infrastructure Report Card. “We have pressed our luck, I believe, and I am concerned. I’m very concerned about it,” said Kimberly J. Brown of Minneapolis, a survivor of the Interstate 35W bridge collapse in 2007. “It could be too late. There may be a bridge collapse on the horizon.” Brown was driving to a soccer game in Minneapolis when the interstate suddenly collapsed over the Mississippi River and her car plunged into the water. Thirteen people were killed and 145 were injured. “I was standing on the bridge, after falling with the bridge and thinking I was surely going to die,” Brown recalled in an interview with ABC News. “My injuries were all invisible … an eerie metaphor to the damages that were happening under this bridge, and the damages I discovered were happening across different infrastructure and that are happening all across our country.” Brown, a writer, set out to investigate causes of the collapse on her own, writing a book about her findings, “The I-35W Bridge Collapse: A Survivor’s Account of America’s Crumbling Infrastructure. “She calls on political leaders in both parties to adopt the lessons from that tragedy and see the human costs of infrastructure neglect. “Once we embrace the reality of why it truly fell, then we need to organize and bind together regardless of party,” Brown said. “Bridges don’t fall and ask us what party we are. We all fell. 145 people were hurt. It did not matter what their voter registration card said.” For years, presidents and congressional leaders have campaigned on the promise of infrastructure improvements to smooth commutes, speed shipments of U.S. goods and add construction jobs by the millions. But inaction in Washington has made “infrastructure week” — a now-annual tradition of politicians talking about new legislation that goes nowhere — a running joke. “One of the issues we get bogged down by each time is, ‘How do you fund it?’ And the question we have to ask ourselves is, ‘How do you not fund — and what does it cost when you don’t fund it?"” said Smith. Biden said a long-elusive, bipartisan infrastructure deal is a top priority in his first term. This month, he named former South Bend, Indiana, Mayor Pete Buttigieg as his nominee for transportation secretary to help lead the charge. “Americans expect us to see to it that the idea of an ‘infrastructure week’ is associated with results — and never again a media punchline,” Buttigieg said. The high expectations for 2021 are being met with cautious optimism by industry leaders. “Infrastructure to me is jobs. That’s what it really means,” said Wiedefeld. “I think the president-elect has shown that he’s an infrastructure guy. He wants to do that. And particularly given what we’ve been through with COVID, we need to start the economy up. The quickest way to do that, you start investing in infrastructure.” This story is part of “America in Transition,” a weekly series of in-depth reports on key parts of Donald Trump’s legacy, Joe Biden’s plans for change and what’s at stake for all Americans. It airs Tuesday nights on ABC News Live Prime at 7 p.m. ET.

Inflation runs hotter in June as US faces recession risk

Cryptocurrency: Why some see it as a way to financially uplift people of color

US job growth stronger than expected as economy adds 372,000 jobs