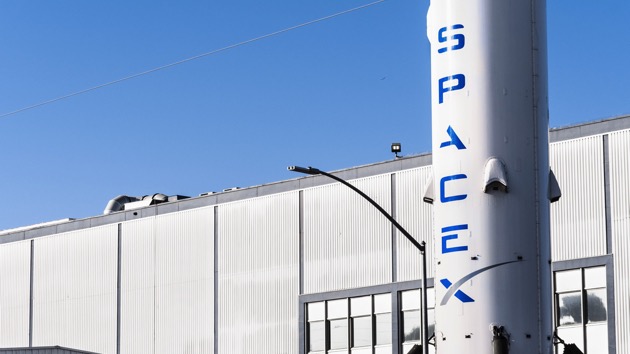 By CATHERINE THORBECKE, ABC News(NEW YORK) — By the end of May, some two months after the coronavirus pandemic arrived in the U.S., the nation was in a deep crisis.Hundreds of thousands were sick with the virus, millions were unemployed and the nation was in the midst of a bitter presidential election.But amid the despair and division, a rare moment of unity emerged with the launch of the two “Space Dads,” Bob Behnken and Doug Hurley, the first NASA-SpaceX astronauts, to the International Space Station — ending a nearly decade-long American dependency on Russia.”Lift off of the Falcon 9 and Crew Dragon. Go NASA, Go SpaceX, Godspeed Bob and Doug!” the announcer said as the spacecraft soared off the Florida coast on May 30. “America has launched.”NASA estimates more than 10 million viewers tuned in to watch that launch live, creating a new online record for the U.S. space agency.”When you sit and watch two astronauts basically ride a rocket for the first time on a new spacecraft for the first time, how can you not all be together hoping for their success and feeling that bit of inspiration and feeling that pride?” Casey Dreier, the senior space policy adviser at the nonprofit Planetary Society, told ABC News.”It reminds us that we are capable of peacefully working together for common goals,” he added of the launch. “And that symbolism, I think it’s really important this year.”While 2020 was scarred by the pandemic, the past year has seen major leaps in the corporate space race as well as major missions to the cosmos that have changed the landscape for both the business and scientific communities.Here are some of the major missions to space over the past year:NASA-SpaceX Demo-2The Demo-2 mission, which brought Behnken and Hurley to the ISS and brought them back to earth a few months later, was the first time a rocket and spacecraft built by a private firm (SpaceX) launched astronauts — marking a new era of space exploration.The May 30 launch also ended an expensive nine-year dependency on Russia to send U.S. astronauts to space, and returned launch capabilities to American soil nearly a decade after NASA’s Space Shuttle program retired.With the pandemic in full swing, Behnken and Hurley said goodbye to their families from 6 feet apart and drove to the historic launchpad 39A at the Kennedy Space Center in Teslas on launch day. While usual launch crowds were urged to stay home, Elon Musk, the electric car executive and SpaceX founder, attended the event at the Kennedy Space Center. President Donald Trump and Vice President Mike Pence also flew in for the history-making event.After a successful launch and a few months aboard the ISS, Behnken and Hurley splashed down back on earth on Aug. 2.John M. Logsdon, a professor emeritus at George Washington University’s Space Policy Institute, told ABC News that while this mission is “fundamentally just taxi services to the Space Station,” it is so significant and has gained so much attention because it “restores the capability that we gave away when we retired the [Space] Shuttle in 2011.””The restoration of human access to space for the United States is a big deal,” Logsdon added. “We claimed to be the leading spacefaring country in the world, but for nine years, we were dependent on Russia for access for our people to space. Getting a capability back is extremely significant.”Moreover, it changed the landscape and potentially paves the way for space tourism and industry. Instead of relying on entire government agencies to go to space, future spacefarers can turn to the private sector.Logsdon added that one of the biggest advancements of 2020 in the field of space was the “routinizing of reusability” by SpaceX, and specifically its Falcon 9 rockets.”The bottleneck in full utilization and exploration of space has been the cost of access and the cost of launch,” he said. “And reusability is intended to significantly reduce that cost, which means it’s opening up space to more people and more uses and more innovation.”NASA-SpaceX Crew-1 ‘Resilience’Just a few months after the success of the Demo-2 mission, NASA and SpaceX were ready to launch their first crewed rotational flight to the ISS on a commercial spacecraft on Nov. 15.

Resilience rises. ?The Crew-1 mission has lifted off on a Falcon 9 rocket from @NASAKennedy at 7:27pm ET and is en route to the @Space_Station. #LaunchAmerica pic.twitter.com/5Q3uXSLvqt

The diverse crew comprised of NASA Astronauts Mike Hopkins, Victor Glover and Shannon Walker, as well as Japanese Aerospace Exploration Agency astronaut Soichi Noguchi.The crew said they were naming their spacecraft “Resilience” — a nod to the ability to overcome the myriad challenges thrown at them during this tumultuous year.”As you look at the definition of resilience, I know it means functioning well in times of stress or overcoming adverse events, and I think all of us can agree that 2020 certainly has been a challenging year,” Hopkins said at a news conference in October.”So the name ‘Resilience’ is really in honor of the SpaceX and NASA teams, and, quite frankly, it’s in honor of our families, of our colleagues, of our fellow citizens, of our international partners and our leaders that have all shown that same quality, that same characteristic, through these difficult times,” Hopkins said.Dreier called the successful SpaceX-NASA missions this year the “tip of the iceberg with what’s about to come” as the private sector’s involvement in space heats up.”SpaceX now is this not just some little startup company, they’re just this aerospace powerhouse, one of the best companies in the world doing this,” he said. “And they’re not just building for NASA. They’re building this new Starship mega-rocket that could fundamentally revolutionize access to space. Companies like Jeff Bezos’s Blue Origin is coming on line, you have Virgin Galactic about ready to do tours into space.”As we have a “whole new slew of commercial and independent means to access space for people,” Dreier said that “it’s kind of up to us at this point, whether we fully realize that potential in this next decade.”China’s Chang’e 5Also in 2020, China launched an ambitious mission to bring a sample of the moon back to earth for the first time in approximately 40 years, since the U.S.-Soviet Space Race era.The Chang’e 5, named after the Chinese moon goddess, launched from the nation’s Hainan Island complex on Nov. 24 with the goal of landing on the moon, drilling and scooping materials and then bringing them back to Earth, according to the China National Space Administration.The spacecraft successfully landed on the near side of the moon on Dec. 1, according to the CNSA.The entirely robotic mission returned to Earth on Dec. 16, moon samples in hand, and made China only the third nation in the world to bring back moon samples after Russia and the U.S.Logsdon said the Chinese lunar sample mission is one of the biggest missions of the year for scientific reasons, and because this is something humanity hasn’t done in four decades.“It’s part of a very comprehensive Chinese scientific investigation of the moon,” he said. “I think it’s impressive because it demonstrates capabilities that are pretty advanced technologically.”Dreier added that “we shouldn’t underplay how impressive that is” of the Chinese lunar sample return mission, noting that multiple lunar landers have failed en route to the moon in recent years.”We’re reminded that is not an easy thing to do to, land something on the moon. And then to come back, it’s even harder,” he said. “Pulling that off, that’s a really impressive mission.”He added that the sample return is a rich gift to the scientific community, because there are so many instruments on earth that can be used to better study the materials.OSIRIS-RExAnother notable mission from the past year was NASA’s first attempt to land on a moving asteroid and collect a sample, a feat it pulled off in 2020 through the OSIRIS-REx mission.The OSIRIS-REx — an acronym for Origins, Spectral Interpretation, Resource Identification and Security-Regolith Explorer — briefly touched the surface of the asteroid Bennu, scooped a sample of extraterrestrial rocks and then propelled itself away on Oct. 20.The rendezvous with the asteroid in October had been the culmination of years of research and efforts. The spacecraft had been orbiting Bennu for two years and had launched four years ago. It is expected to land back on Earth with the sample in 2023, but NASA said so far all data indicates the mission was a success.It will also make the U.S. only the second country ever to return an asteroid sample, after Japan.Dreier told ABC News that in his mind, the OSIRIS-REx mission was “one of the most exciting missions of the year.”The spacecraft’s slow decent to the surface of Bennu and its mechanical arm show huge advancements in the robotics side of spaceflight, according to Dreier.”It’s so delicate. It’s just these rubble piles that are barely held together by just a tiny bit of gravity,” Dreier said of the asteroid Bennu, where the spacecraft touched down very briefly to collect a sample.”This is not just an audacious mission,” he added. “They’ve nailed the mission and came in under budget. We don’t usually talk about that with NASA. This mission cost less than they estimated.””It’s just performed flawlessly and it’s coming back to Earth in a couple of years,” Dreier said. “The fact that they collected the sample, they did it successfully. That was a big, big deal. That’s really hard to do. And it just looked fantastic when they did it.”

Mars PerseveranceFinally, one of NASA’s most exciting missions that has been years in the making is a mission to Mars, which launched this year.The NASA Perseverance rover, which has the goal of seeking out signs of ancient life as well as collecting samples on the Red Planet, is currently en route to Mars and expected to land in February 2021.The rover, which is also expected to pave the way for future human exploration of our neighboring planet, launched from Cape Canaveral Air Force Station in Florida on July 30.NASA Administrator Jim Bridenstine said at launch that it is “the first time in history when NASA has dedicated a mission to what we call astrobiology, the search for life, maybe now or ancient life, on another world.”The name “Perseverance” was chosen by Alex Mather, a middle school student from Virginia, who won a NASA essay contest.The mission includes the six-wheeled rover to explore Mars, as well as a helicopter-like drone and a “MOXIE” experiment to create oxygen out of Mars’ atmosphere. Perseverance is expected to stay on the Red Planet for at least one Martian year, or 687 Earth days.Dreier called the Perseverance NASA’s “most ambitious, audacious, wild rover.””It’s this massive behemoth of a rover, it has a helicopter that it’s going to fly around, it’s going to do the first test of turning Martian air into breathable oxygen on Mars,” he said. “It has a slew of instrumentation that’s going to directly look for signs of past biological signals.”The Mars Perseverance mission, which has been decades in the making, is also setting the stage for future missions and even human exploration of Mars.”These subsequent missions, they depend on the success of Mars Perseverance,” Dreier said. “The next 10 years of Mars exploration depends on that success. It’s going to be a really, really exciting mission.”