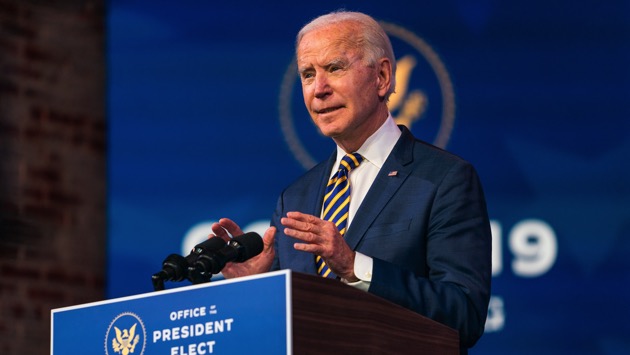 Ending America’s wars, without raising terror threatAmong the first issues Biden will have to deal with is the U.S. military presences in Afghanistan and Iraq, where Trump has drawn troops down to just 2,500 in each country after nearly two decades of fighting.”The Trump administration gave the Biden team an incredible gift by recklessly drawing down American military forces and political engagement in Afghanistan and in Iraq because near as I can tell, President Biden and his team have the exact same policy that they want to undertake, and the Trump administration will now get all the blame for the obvious consequences of it,” Schake told ABC News.Biden has not been clear about what he would do with U.S. troops in either country, but he’s signaled he would at least slow full withdrawals. In Afghanistan, he’s indicated he would work to hold the Taliban to its commitments under Trump’s deal with the militant group, but focus U.S. forces on al-Qaida and the Islamic State.The key questions are what will Biden do if violence threatens to engulf Afghanistan or if negotiations between the Taliban and Afghan government fall apart, and how to ensure the country doesn’t risk becoming a terrorist safe haven again — a commitment the Taliban made under the U.S. deal that hasn’t been kept yet.Elsewhere, the threat of Islamist terrorism is expanding. ISIS and al-Qaida affiliates are taking advantage of the insecurity and chaos in Syria, northern Mozambique, the Philippines, and across the Sahel, the northern Africa desert region that includes Mali, Niger, Burkina Faso and Nigeria. While Biden is likely to focus on great power rivalries or U.S. allies, the threat of terrorism remains potent.Copyright © 2020, ABC Audio. All rights reserved.

Texas man detained in Russia for months due to ‘political purposes’: Congressman