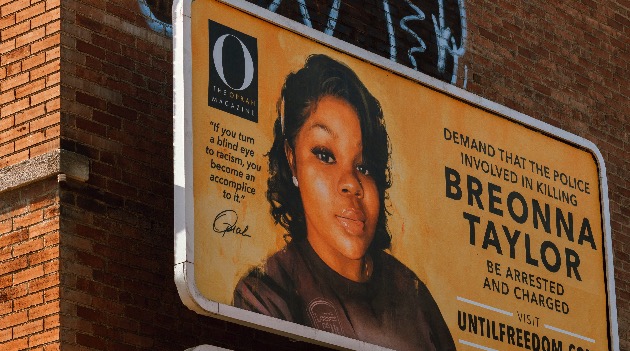 By MARK OSBORNE, ABC News(LOUISVILLE, Ky.) — The Louisville Metro Police Department has moved to fire two officers involved in the fatal shooting of Breonna Taylor in her apartment earlier this year.Officer Myles Cosgrove and Detective Joshua Jaynes were both notified of termination Tuesday, according to their lawyers. Both officers will answer the termination notices in a hearing before Police Chief Yvette Gentry, who was named to the role in September, on Thursday. They can also appeal the police chief’s final determination.”We plan to attend the pre-termination hearing on December 31st, although I expect the result has already been pre-determined,” Thomas Clay, Jaynes’ lawyer, told ABC News in a statement. “I fully expect Mr. Jaynes will be terminated after the ‘hearing’ no matter what the evidence is to the contrary. We will appeal any disciplinary action taken against Mr. Jaynes because I believe the evidence shows he did nothing wrong.”Jaynes was not present at the shooting, but prepared the search warrant for Taylor’s apartment.Louisville’s River City Fraternal Order of Police said in a statement, “The FOP is aware that two of our members received pre-termination opportunity to respond notices today, outlining the chief’s current intent to terminate their employment. In the near future both members will have an opportunity to have a hearing before the chief of police and respond to the information contained in the notices. After those hearings, when the chief makes her final determinations, our members have the right to appeal any discipline that may be issued.”A ballistics analysis determined that Cosgrove fired the shot that killed Taylor, officials said.”I can confirm that Mr. Cosgrove has received a pre-termination notice. Otherwise, we have no comment,” Cosgrove’s attorney, Jarrod Beck, told ABC News.Another officer involved in the raid, Brett Hankison, was fired in June. He had been the only officer punished in the wake of the botched raid.Hankison was also indicted by a grand jury in September on three counts of wanton endangerment in the first degree in the shooting that killed Taylor, but neither he nor the other two officers involved in the fatal encounter were charged in her death. Hankison was charged for firing bullets into neighboring apartments.He has pleaded not guilty.Sgt. Jonathan Mattingly, who also fired into the apartment, has not been fired by the department. Mattingly was shot in the leg during the raid.”The Mayor of Louisville has informed the mother of Breonna Taylor that LMPD intends to terminate Officers Cosgrove and Jaynes and that both officers have the right to appeal,” a lawyer for the Taylor family told ABC News.Jean Porter, deputy director of communications for Louisville Mayor Greg Fischer, said in a statement to ABC News, “LMPD Chief Yvette Gentry has initiated disciplinary procedures for officers involved in the Breonna Taylor case, following investigations by LMPD’s Professional Standards Unit. State law KRS67c.326 (1) (f) precludes comments from any persons in Louisville Metro Government about the allegations in these cases.”Taylor, a 26-year-old emergency medical technician, was killed when the officers executed a “no-knock” warrant on the home she shared with her boyfriend, Kenneth Walker, on March 13. The police were looking for Jamarcus Glover, Taylor’s ex-boyfriend, who allegedly was a known drug trafficker. Walker, who said he believed the home was being robbed, opened fire on the officers. They returned fire, striking and killing Taylor.Walker, who was a licensed gun owner, was initially charged with attempted murder, but that was eventually dropped. He has sued the Louisville Metro Police Department and city of Louisville, claiming he had a right to defend himself according to the state’s stand your ground law. Mattingly filed a countersuit in late October.The lack of discipline helped to spark months of protests in Kentucky and across the U.S., especially in the wake of the police killing of George Floyd in Minneapolis in late May.Jaynes was placed on administrative reassignment in June over questions about how and why the search warrant was approved, then-acting Police Chief Robert Schroeder said.Copyright © 2020, ABC Audio. All rights reserved.