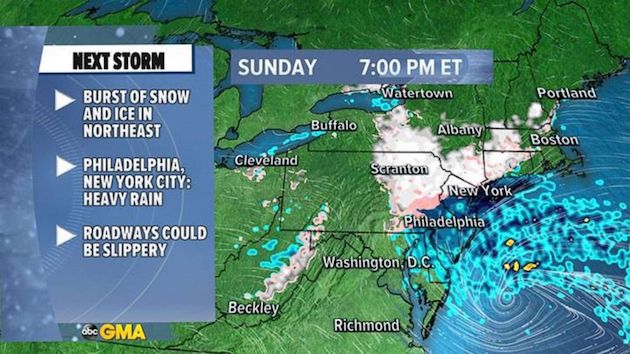 (NEW YORK) —A New Year’s storm that brought very heavy snow and ice from Texas to the Midwest is now bringing more winter weather to the Northeast.

The storm brought over a foot of snow to west Texas and up to 10 inches of snow just outside Oklahoma City. A band of locally 5 to 7 inches of snow also went through parts of Kansas.

Six-and-a-half inches of snow in Wichita, Kansas was enough to break a daily record at the airport. The storm also brought a large swath of .25 to .30 inches of ice across parts of Missouri and Illinois, causing numerous accidents and downed trees on New Year’s Day. Parts of Illinois saw its most significant ice event in several years. Ice was reported through Indiana, Ohio and Pennsylvania as the storm moved east. The storm also brought two reported tornadoes to parts of Georgia, including one that injured a person in Monroe County.

As of Saturday morning, radar is showing the storm situated over the northeast U.S. with snow and a wintry mix moving through parts of New York and New England. Roadways are expected to be slippery across much of the Northeast this morning through the afternoon. Locally, up to 8 inches of snow is expected in parts of far northern New York through northern Vermont and New Hampshire.

Along the cold front, heavy rain and storms are developing in parts of the Southeast including parts of the Florida panhandle. This is where another low pressure is developing this morning, and that storm is expected to move north over the weekend.

Several rounds of heavy rain are expected to move over Florida, Georgia and South Carolina Saturday which could cause flash flooding. Locally, over 2 inches of rain is expected. Gusty storms will also be possible which could cause downed trees and power lines.

Another disturbance from the north and west will move across parts of the Midwest Saturday and bring a little bit more snow to parts of Missouri and Illinois. This disturbance is expected to make for a quick-moving storm that rides up the east coast this weekend.

By Sunday morning, a swath of snow is expected from Chicago to Detroit. Another round of freezing rain and snow is expected just outside of Philadelphia and Washington D.C. There could be lots of slippery roadways across Maryland and Pennsylvania.

Meanwhile, the storm will bring a round of heavy rain from Wilmington, North Carolina to Richmond, Virginia.

By Sunday night there could be snow falling just outside of New York City back through Scranton, Pennsylvania and up toward Hartford, Connecticut and Albany, New York. The storm will be over before Monday morning.

The result of all this unsettled activity should be locally 3 or more inches of rain in parts of the Southeast, locally over 6 inches of snow in parts of the Northeast, as well as some ice accumulation from Pennsylvania to Vermont.

A series of storms is expected to impact parts of the Northwest this week, however a predominant storyline developing in the weather will be the lack of cold air. It is looking more likely that above average temperatures are expected through the first half of January for much of the central and eastern U.S., especially in the Midwest and the Northeast.