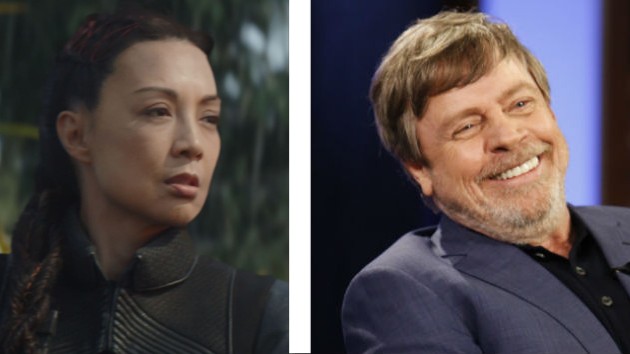 (LOS ANGELES) — (SPOILER ALERT) The surprise cameo during the season finale of The Mandalorian had even famous fans agog — including one who was on set for the big spoiler: Ming-Na Wen.

The Disney Legend, Mulan star and Agents of S.H.I.E.L.D. vet plays assassin Fennec Shand in the hit Disney+ series, and she took to Twitter on New Year’s Eve to praise Star Wars star Mark Hamill, who appeared in the finale as a digitally de-aged Luke Skywalker.

“You (& Luke) have been immensely inspirational & impactful to my childhood & as an adult,” Wen said. “To have shared a scene with you in @themandalorian is truly one of the biggest highlight, not just in my career, but in my life. Thank you”

Complete with the lovey eyes and a heart emoji, she signed it with, “Your fan always, Ming-Na aka Fennec.”Hamill retweeted the message, commenting, “So this happened & I’m literally speechless, other than to say: the pleasure was all mine @MingNa!” He finished with the hashtag, “#YoureNotSoBadYourself.”

Ming-Na replied, “I’ve reached nerd nirvana. Gotta say, this Is WAY cooler than the time Steven Tyler spilled red wine on my arm and wiped it off with cocktail napkins at a party.”

Last week, Hamill thanked the “true fans” who swooned over his character’s super-secret cameo. “To see them thrilled beyond belief with the exuberance of children, whooping it up, screaming in ecstasy, the tears of sheer joy…it’s a rollercoaster of emotions I’ll never forget.”

The action-packed scene, in which Skywalker goes full Jedi as he rescues the Mandalorian heroes and saves Grogu, AKA “Baby Yoda,” was seen by many fans as a redemption of the character after director Rian Johnson’s divisive imagining of the character in Star Wars: The Last Jedi.