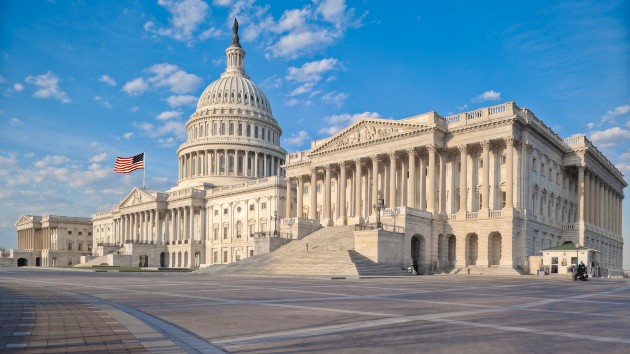 (WASHINGTON) — In a historic turn of events Wednesday, more than 100 Republicans in the House and a dozen in the Senate are expected to join with President Donald Trump in a last-ditch effort to challenge his election loss to President-elect Joe Biden in what Democrats are calling an unprecedented attack on American democracy.While their complaints are not expected to shift the final outcome, when Congress convenes in the House chamber in joint session to ratify the Electoral College vote confirming Biden’s win, Republicans in the House and Senate are expected to lodge formal objections to the electoral results in at least three states, according to GOP aides.What traditionally has been a solemn and relatively routine process of counting the certified electoral votes from each state will instead prompt two hours of likely bitter debate and then votes in the House and Senate on each challenge.Sens. Ted Cruz of Texas, Kelly Loeffler of Georgia and Josh Hawley of Missouri are expected to co-sign written objections from House Republicans to the slate of electors from Arizona, Georgia and Pennsylvania, respectively.Given that the process could take closer to three or four hours for each state, and that the chambers have been staggering voting during the coronavirus pandemic, the joint session, with the nation watching, could last late into the night, possibly into early Thursday morning, even if the eventual outcome in Biden’s favor is all but certain.Republicans in the House could also object to the results from Wisconsin, Michigan and Nevada, though it’s not clear if any Senate Republicans will join their objections, a necessity to trigger the formal review process of those states’ electors.The Senate’s top Republican, Majority Leader Mitch McConnell, who opposes the move by his GOP colleagues, is expected to speak first once an objection is raised. The Senate’s top Democrat, Chuck Schumer, will be on hand as well, with other senators watching from the public gallery because of social distancing.Governors from all 50 states have certified the votes and both the House and Senate are expected to reject all challenges — although potentially half of the House Republican caucus — more than 100 members — and roughly a dozen GOP senators could vote to reject the election results in the key states that helped Biden defeat Trump, according to one senior House GOP aide.The joint session of Congress to certify the election results, presided over by Vice President Mike Pence, will begin at 1 p.m. Wednesday with echoes of language and ceremony mandated in the Constitution and in centuries-old federal law.But Trump has viewed the Jan. 6 session as a high-profile stage to continue his so-far futile effort to overturn the election results and raise unsubstantiated claims of widespread election fraud — turning the traditional pro-forma joint session into a de-facto loyalty test for congressional Republicans, who are caught between Trump and his base, and upholding the democratic election process.The effort, which is certain to fail, has also put mounting political pressure on Pence.Despite his limited role managing the joint session, Trump and his most loyal supporters have called on the vice president to take control of the process to deny Biden electoral votes, falsely claiming he has the authority under the Constitution to swing the election in his favor.Pence told Trump Tuesday he does not have the power to reverse the outcome of the November election when he presides over the joint session, two sources familiar with the matter confirmed to ABC News, in a development first reported by the New York Times.House Democrats will be prepared to respond to Republican objections and efforts to knock proceedings off script, according to a senior Democratic aide.House Democrats mounted unsuccessful challenges to state results in the joint sessions following the 2000 and 2016 presidential elections, but did not have a senator willing to back the effort to prompt debate and votes in both chambers.In 2005, after President George W. Bush’s victory over Democratic Sen. Jon Kerry of Massachusetts, Sen. Barbara Boxer, D-Calif., and Rep. Stephanie Tubbs Jones, D-Ohio, forced debate and a vote on the electoral votes from Ohio, after raising concerns about the administration of the election in the swing state. Both chambers overwhelmingly rejected the challenge.Neither of the Democrats disputed the results of the presidential election, and Democratic presidential nominee John Kerry, then a senator from Massachusetts, had already conceded and did not support the effort.Because of the pandemic, members will be barred from the House chamber during the joint session unless they are scheduled to speak, according to guidance issued to lawmakers by the House sergeant-at-arms.”During the joint session, access to the Floor of the House will be limited to those Members who are scheduled to speak during the joint session,” Paul Irving, the House sergeant-at-arms, and Dr. Brian Monahan, the attending physician for Congress, wrote in the memo, which ABC News obtained. “Unless participating in the joint session, Members are encouraged to remain in their offices unless called to vote.”Some Republican and Democratic lawmakers are asking their staff to work remotely and avoid Capitol Hill on Wednesday, in light of planned demonstrations, and members have also been advised to use the underground tunnel system to travel from their offices to the floor, to avoid walking outside amid the protests.