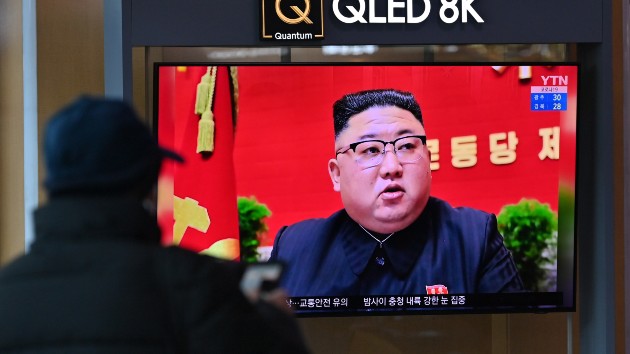 (SEOUL, South Korea) — North Korean leader Kim Jong Un, in an unprecedented move during the first day of the communist regime’s largest political gathering, acknowledged that his economic development plan for the country has failed.”The goal of the five-year national economic development strategy fell far short in almost all sectors,” Kim was quoted as saying by the state news agency during his opening speech Tuesday at the 8th Congress of the Workers’ Party of Korea.Some 7,000 party members are gathered in Pyongyang for the days-long event to review the progress of the economic plan over the past five years. None of the attendees sitting shoulder-to-shoulder in the packed room on Tuesday were seen wearing face masks, despite the coronavirus pandemic.”The challenges that hinder our efforts and advancement exist both externally and internally,” Kim noted, adding that “a series of the worst of worst unprecedented crises” could only be overcome by “strengthening our own power, an independent competence.”The ruling Workers’ Party congress, chaired by Kim, has control over every institution in North Korea and reviews the plans set forth by the previous congress. Kim entered the stage escorted closely by his sister, Yo Jong, widely considered to be North Korea’s second-in-command. She occupied a seat on stage in the second row, with fellow executive branch members of the Workers’ Party. Experts and analysts in Seoul widely expect Yo to be promoted to a higher official position during this year’s congress.Go Myong-Hyun, a research fellow at the Asan Institute of Policy Studies in South Korea’s capital, told ABC News that Kim “went for a self-critique by mentioning internal reasons for failure,” which came as a surprise.Ahn Chan-il, a former North Korean military official who defected to the South in 1979 and now heads the World Institute for North Korea Studies in Seoul, told ABC News that it was “a rare move for the North Korean leader to accept failure during the national party congress.””The atmosphere of this year’s congress is different from the 7th congress in 2016, when he sent self-congratulatory messages for the party,” Ahn said.Some experts, like Go, are also closely watching to see whether Kim has a message for the outside world, particularly South Korea and the United States.”Kim may come up with a message for President-elect Joe Biden,” he said, “since there hasn’t been any communication between Kim Jong Un and the upcoming U.S. administration.”Others are anticipating mild remarks to the outside world, if any.”I don’t see any reason for Pyongyang to make military provocations at this point,” Kim Philo, associate professor at Seoul National University’s Institute for Peace and Unification Studies, told ABC News. “North Korea has a belief that no other country will be reckless enough to confront a nuclear-armed nation.”Cha Du Hyeogn, a visiting research fellow of the Asan Institute of Policy Studies, also predicted Kim to stay low-key on any messages to South Korea or the United States.“If Kim Jong Un wanted to make a strong statement or action to grab international attention,” Cha said, “he would have planned it for the New Year’s day when all eyes were focused on him.” Copyright © 2021, ABC Audio. All rights reserved.

US has put ‘substantial proposal on the table’ to get Griner, Whelan out of Russia