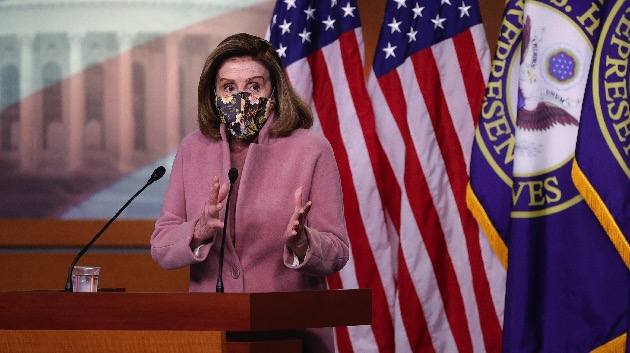 By BENJAMIN SIEGEL, ABC News(WASHINGTON) — House Speaker Nancy Pelosi on Thursday told reporters that the House and Senate are “ready” to proceed with former President Trump’s second impeachment trial, but she said transmission of the articles is being held up by questions about how the trial would work.”I’m not going to be telling you when it is going … they are now ready to receive, but there are other questions of how a trial to proceed. But we are ready,” she said. “It will be soon, as I said you will be the first to know.””It will be soon, I don’t think it will be long, but we must do it,” she said.Pelosi dismissed Republicans’ concerns that impeachment could divide lawmakers so soon after the inauguration.”It’s not really unifying to say, let’s just forget it, and move on,” Pelosi said.”Just because he is gone, thank God, we don’t say to a president, ‘Do whatever you want in the last months of your administration … because people want to make nice nice,’ … I think that would be harmful for unity.”On the question of witnesses, Pelosi deferred to the House managers, but differentiated between the evidence needed for Trump’s first trial, and this upcoming one.”I do see a big difference between something that we all witnessed, versus what information you might need to substantiate an article of impeachment based in large part on a phone call the president made … but it’s up to them,” referring to the managers.New Senate Majority Leader Chuck Schumer reaffirmed Thursday that there will be an impeachment trial and but that he and Minority Leader Mitch McConnell are still working to agree on the rules.”Speaker Pelosi will determine when she will send the articles over. Leader McConnell and I are trying to come up with a bipartisan agreement on how to conduct the trial. But make no mistake about it,” Schumer said. “There will be a trial, there will be a vote, up or down or whether to convict the president.”At the White House, press secretary Jen Psaki denied the trial poses a problem for pursuing President Joe Biden’s agenda: “We are confident, though, that just like the American people can, the Senate can also multitask. And they can do their constitutional duty while continuing to conduct the business of the American people,” she said Wednesday.Pelosi also didn’t rule out the conduct of lawmakers coming under investigation in any probe of the Capitol Hill riot, accusing some members of giving “aid and comfort” to rioters.On Biden’s inauguration she said, “What a difference a day makes,” she said. “It was so perfect, in my view.”ABC News’ Allison Pecorin and Sarah Kolinovsky contributed to this report.

DHS to combat domestic violent extremism with $77 million from FEMA