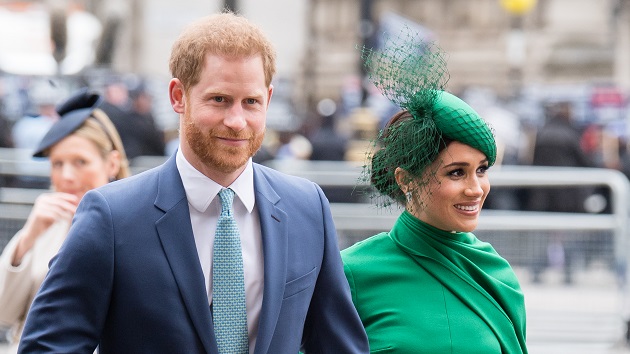 By KATIE KINDELANVIA(LOS ANGELES) — Prince Harry is doubling down on his calls to reform social media two weeks after an angry mob staged a deadly siege at the U.S. Capitol.Many who laid siege to the Capitol did so on the erroneous belief that the 2020 election was stolen from former President Donald Trump, a conspiracy theory that spread quickly on social media, experts say.”We have seen time and again what happens when the real-world cost of misinformation is disregarded. There is no way to downplay this,” Harry said in a new interview with Fast Company. “There was a literal attack on democracy in the United States, organized on social media, which is an issue of violent extremism.”Prince Harry, who now lives in California, said he and his wife, Duchess Meghan, spent much of the past year talking with experts about the spread of misinformation, which he calls a “humanitarian issue.””The avalanche of misinformation we are all inundated with is bending reality and has created this distorted filter that affects our ability to think clearly or even understand the world around us,” he said. “What happens online does not stay online — it spreads everywhere, like wildfire: into our homes and workplaces, into the streets, into our minds. The question really becomes about what to do when news and information sharing is no longer a decent, truthful exchange, but rather an exchange of weaponry.”Harry described how his work on social media reform has been influenced by the online harassment he and Meghan have faced throughout their relationship. The couple wed in 2018 and stepped down last year from their roles as senior working members of Britain’s royal family.They now live with their nearly 2-year-old son Archie in Montecito, California.”I was really surprised to witness how my story had been told one way, my wife’s story had been told one way, and then our union sparked something that made the telling of that story very different,” said Harry. “That false narrative became the mothership for all of the harassment you’re referring to. It wouldn’t have even begun had our story just been told truthfully.””But the important thing about what we experienced is that it led to us hearing from so many others around the world. We’ve thought a lot about those in much more vulnerable positions than us, and how much of a need there is for real empathy and support,” he said. “To their own degree, everyone has been deeply affected by the current consequences of the digital space. It could be as individual as seeing a loved one go down the path of radicalization or as collective as seeing the science behind the climate crisis denied.””We are all vulnerable to it, which is why I don’t see it as a tech issue, or a political issue — it’s a humanitarian issue,” Harry added.Harry and Meghan, the Duke and Duchess of Sussex, are no longer on social media, having disbanded their popular Instagram account, Sussex Royal, after they left the royal family.But Harry denied a recent report saying he and Meghan had left social media for good, saying he has seen how the platforms “can offer a means of connecting and community, which are vital to us as human beings.””We will revisit social media when it feels right for us — perhaps when we see more meaningful commitments to change or reform — but right now we’ve thrown much of our energy into learning about this space and how we can help,” Harry told Fast Company.The Sussexes have spent the past year working on the issue of social media through their new nonprofit venture, the Archewell Foundation.There, they have partnered with the Center for Humane Technology, an organization led by a former Google ethicist that is “dedicated to radically reimagining our digital infrastructure,” according to the Archewell website.Harry and Meghan have also established the Archewell Foundation Fund for the UCLA Center for Critical Internet Inquiry with the goals of “reimagining technology, championing racial and economic justice in the tech sector, and strengthening democracy through culture-making and public policy work,” according to the Archewell website.Harry told Fast Company he has learned from experts that the solutions for improving social media range from accountability to compassion.”There has to be accountability to collective wellbeing, not just financial incentive. It’s hard for me to understand how the platforms themselves can eagerly take profit but shun responsibility,” he said. “There also has to be common, shared accountability.””We can call for digital reform and debate how that happens and what it looks like, but it’s also on each of us to take a more critical eye to our own relationship with technology and media,” Harry said, noting that people can start by setting time limits on their social media, fact-checking the information they’re seeing and being kinder and more compassionate in their posts and comments.”Humans crave connection, social bonds, and a sense of belonging. When we don’t have those, we end up fractured, and in the digital age that can unfortunately be a catalyst for finding connection in mass extremism movements or radicalization,” he said. “We need to take better care of each other, especially in these times of isolation and vulnerability.”With all that there is to be done, Harry said he remains optimistic that the online space can be made healthier, noting, “We have to believe in optimism because that’s the world and the humanity I want for my son, and all of us.”Copyright © 2021, ABC Audio. All rights reserved.

At least 79 killed in prison riots in Ecuador as gangs battle for control, officials say