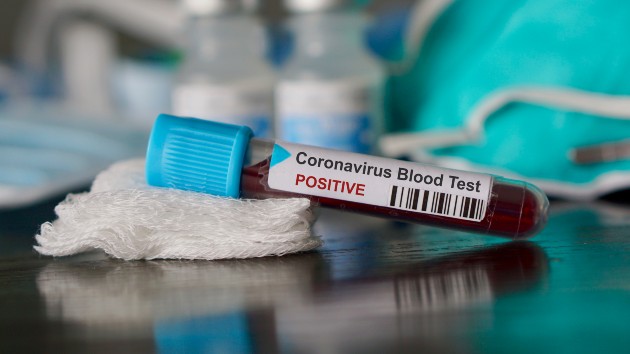 By MORGAN WINSOR, ERIN SCHUMAKER and EMILY SHAPIRO, ABC News(NEW YORK) — A pandemic of the novel coronavirus has now infected more than 97.5 million people worldwide and killed over 2 million of them, according to real-time data compiled by the Center for Systems Science and Engineering at Johns Hopkins University.Here’s how the news is developing Friday. All times Eastern:

Jan 23, 10:40 amNorth Carolina identifies its 1st case of UK variantNorth Carolina has identified its first case of the coronavirus’ United Kingdom variant, state health officials said.The variant was confirmed in an adult in Mecklenburg County.The U.S. has 195 confirmed cases of the variant across 21 states, according to North Carolina’s Department of Health and Human Services.ABC News’ Josh Hoyos contributed to this report.

Jan 22, 6:50 pmUnited CEO wants to make vaccines mandatory for employeesUnited Airlines’ top executive said he would like the airline to require COVID-19 vaccination for employees.”I think the right thing to do is for United Airlines, and for other companies, to require the vaccines,” CEO Scott Kirby said during an employee town hall Thursday. “That said, we have to have the logistic challenges worked out … and we need some others to show leadership, particularly in the health care industry.”Kirby told employees that if other companies mandate vaccines, “You should probably expect United to be amongst the first wave of companies that do it as well.”For now, United is urging employees to get the vaccine as soon as possible, according to an internal memo obtained by ABC News.On an earnings call yesterday, an executive said the company has been working with local governments “to move our employees up in prioritization of essential workers for vaccination, both for their safety and the safety of our customers.”-ABC News’ Gio Benitez

Jan 22, 2:49 pmNew Jersey confirms 1st cases of UK variantTwo people — a man and a child — were identified as the first cases of the United Kingdom variant in New Jersey, officials said. The Ocean County man, who is in his 60s, had no travel history or clear exposures to others who were ill, said the state’s Health Commissioner, Judy Persichilli. He developed symptoms on Dec. 29 and was tested one week later. His “symptoms have since resolved and he was never hospitalized,” Persichilli said.The child, who had traveled to northern New Jersey, was tested on Jan. 11 in New York City and is asymptomatic, she said.ABC News’ Aaron Katersky contributed to this report.

Jan 22, 1:43 pmUK variant may be associated with higher mortality, Boris Johnson saysMore people are testing positive for the United Kingdom’s variant of the coronavirus, and British Prime Minister Boris Johnson said Friday “there is some evidence that the new variant may be associated with a higher degree of mortality.”U.K. Chief Medical Officer Chris Whitty stressed that the data is uncertain and there is a chance the new variant is increasing infections and mortality.The U.K. has seen record daily death tolls several times this week.There were 1,401 deaths in the last 24 hours.

Jan 22, 1:00 pmNew York running out of vaccines today but more on the way: CuomoNew York state has used 97% of its allocated vaccine doses so far (for weeks 1 through 5) and will run out of doses by the end of the day, Gov. Andrew Cuomo said Friday.Week 6 doses are currently being delivered, the governor said.New York’s positivity rate has fallen to 5.65%, Cuomo said. Hospitalizations are also on the decline.

Jan 22, 10:32 am’Patient No. 1′ in US is now ‘back to his normal life’On Jan. 20, 2020, the first COVID-19 patient in the United States, known as “patient No. 1,” was brought to a Washington state hospital.Dr. George Diaz, the head of infectious diseases at Providence Regional Medical Center in Seattle, treated that patient. Diaz would later learn how to isolate COVID-19 patients properly, how to protect hospital staff and how to treat the illness.”We used Remdesivir, which was a new anti-viral at the time. He was the first patient to receive this drug in the world, and he had a good response to treatment,” Diaz told ABC’s Nightline.”Patient No. 1″ was treated for five days before being released from the hospital, Diaz said. One year later, he is “doing great,” Diaz said.”He’s fully recovered and back to his normal life,” Diaz said. “Many people survive the illness but have lots of medical problems afterwards. Fortunately, Patient One recovered well.” Jan 22, 10:10 amFrance to require negative COVID-19 test for all arrivals by boat or planeFrench President Emmanuel Macron announced that all travelers arriving by boat or plane will have to test negative for COVID-19 before entering the country.The new measure, which goes into effect Sunday, includes visitors from within the European Union as well as those outside the regional bloc. They must take a polymerase chain reaction (PCR) test up to three days before departure and provide evidence of a negative result before they travel, according to a statement from Macron’s office released late Thursday.People traveling for essential reasons, such as cross-border or ground transportation workers, will be exempt from the requirement. People arriving from other EU member states by train or car will also be exempt.France has the sixth-highest tally of diagnosed COVID-19 cases in the world, after the United States, India, Brazil, Russia and the United Kingdom, according to a count kept by Johns Hopkins University.The European nation of 67 million people confirmed another 22,848 cases of COVID-19 on Thursday, along with an additional 358 fatalities from the disease. That brings the cumulative totals to 2,987,965 cases and 71,998 deaths, according to the latest data from France’s public health agency.

When asked during an interview Friday on CNN’s New Day about whether the Trump administration’s lack of truthfulness in some cases regarding the coronavirus pandemic had cost American lives, Dr. Anthony Fauci said “it very likely did.”

“I don’t want that, John, to be a soundbite, but I think if you just look at that you can see that when when you’re starting to go down paths that are not based on any science at all,” Fauci, director of the National Institute of Allergy and Infectious Diseases, told CNN’s John Berman. “Particularly when you’re in the situation of almost being in a crisis with the number of cases and hospitalizations and deaths that we have — when you start talking about things that make no sense medically and no sense scientifically, that clearly is not helpful.”Fauci, who was a member of former President Donald Trump’s coronavirus task force, had disagreed with Trump on how to approach the pandemic. At one point, Trump suggested he was considering firing Fauci.

“There’s no secret, we’ve had a lot of divisiveness,” Fauci, who is now the chief medical adviser to President Joe Biden, told CNN. “We’ve had facts that were very, very clear that were questioned. People were not trusting what health officials were saying.”Jan 22, 9:00 amNFL invites vaccinated health care workers to Super Bowl The National Football League announced Friday that it’s inviting 7,500 vaccinated health care workers to attend the Feb. 7 Super Bowl in Florida “to thank and honor them for their continued extraordinary service during the pandemic.”

Jan 22, 6:12 amReports that Japan is looking to cancel Tokyo Olympics are ‘categorically untrue,’ government saysReports that the Japanese government has privately concluded that the upcoming Tokyo Olympics will have to be canceled are “categorically untrue,” according to Japan’s Cabinet Secretariat of the Headquarters for the Tokyo 2020 Olympic and Paralympic Games.”The renewed schedules and venues for the Tokyo 2020 Games, starting with the Opening Ceremony on July 23 this year, were determined at the IOC Session in July last year. All parties involved are working together to prepare for the successful Games this summer,” the cabinet secretariat said in a statement Friday. “We will implement all possible countermeasures against COVID-19 and continue to work closely with the IOC, the Tokyo 2020 Organising Committee and the Tokyo Metropolitan Government in our preparations for holding a safe and secure Games this summer.”The statement follows a report published Thursday evening by British newspaper The Times, which cited “a senior member of the ruling coalition” who said there is agreement that the Games are doomed and the focus now is on securing the event for the Japanese capital in the next available year, 2032.The 2020 Summer Olympics were supposed to kick off in Tokyo last year on July 24. But in late March, amid mounting calls to delay or cancel the upcoming Games, the International Olympic Committee (IOC) and Japan’s prime minister announced that the event would be held a year later due to the coronavirus pandemic. The Games are now scheduled to open in Tokyo this summer on July 23, but doubt has surfaced as Japan — and much of the world — grapples with a resurgence of COVID-19 infections.

Jan 22, 5:21 amUS reports over 188,000 new casesThere were 188,952 new cases of COVID-19 confirmed in the United States on Thursday, according to a real-time count kept by Johns Hopkins University.Thursday’s case count is lower than the country’s all-time high of 298,031 new cases, which were confirmed on Jan. 2, Johns Hopkins data shows.An additional 3,955 fatalities from COVID-19 were registered nationwide on Thursday, down from a peak of 4,462 new deaths on Jan. 12, according to Johns Hopkins data.COVID-19 data may be skewed due to possible lags in reporting over the holiday weekend and earlier holidays.A total of 24,631,890 people in the U.S. have been diagnosed with COVID-19 since the pandemic began, and at least 410,349 have died, according to Johns Hopkins data. The cases include people from all 50 U.S. states, Washington, D.C., and other U.S. territories as well as repatriated citizens.Much of the country was under lockdown by the end of March as the first wave of the pandemic hit. By May 20, all U.S. states had begun lifting stay-at-home orders and other restrictions put in place to curb the spread of the novel coronavirus. The day-to-day increase in the country’s cases then hovered around 20,000 for a couple of weeks before shooting back up over the summer.The numbers lingered around 40,000 to 50,000 from mid-August through early October before surging again to record levels, crossing 100,000 for the first time on Nov. 4, then reaching 200,000 on Nov. 27 before nearing 300,000 on Jan. 2.

Jan 22, 4:26 am’There is no plan B’ for Tokyo Olympics, IOC chief saysDespite rising COVID-19 infections in Japan, International Olympic Committee president Thomas Bach said Thursday that there is “no reason whatsoever” to believe the Olympic Games in Tokyo will not open on July 23 as planned.”This is why there is no plan B and this is why we are fully committed to make these games safe and successful,” Bach told Japanese news agency Kyodo in an interview Thursday.However, Bach admitted he could not guarantee that the stands would be full or rule out the possibility that the Games would be held without spectators, according to Kyodo.The 2020 Summer Olympics were supposed to kick off in Tokyo last year on July 24. But in late March, amid mounting calls to delay or cancel the upcoming Games, the International Olympic Committee and Japan’s prime minister announced that the event would be held a year later due to the coronavirus pandemic.Now, Japan is facing a resurgence of COVID-19. The country of 126 million people reported the highest number of new cases in the Western Pacific region last week. The infection rate — currently at 32.8 cases per 100,000 people — increased by 4% over the previous week, according to the World Health Organization’s latest COVID-19 weekly epidemiological update.The Japanese Ministry of Health, Labor and Welfare confirmed 5,662 new cases of COVID-19 as well as an additional 87 fatalities from the disease on Thursday, bringing the cumulative totals to 348,646 cases and 4,829 deaths.Japanase Prime Minister Yoshihide Suga has declared a state of emergency in Tokyo and 10 other prefectures due to climbing case counts and growing death tolls.Copyright © 2021, ABC Audio. All rights reserved.

Spring-like weather across much of US, possible heavy snow in Rockies and parts of West