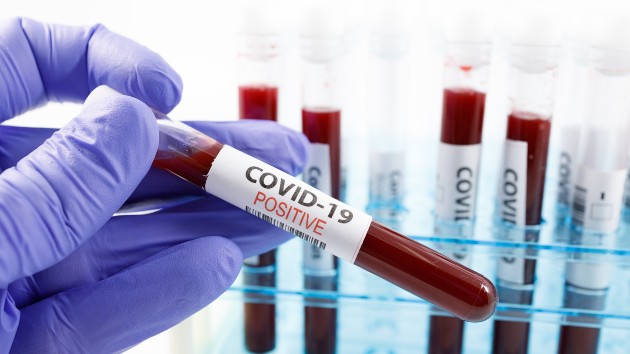 By MORGAN WINSOR, ERIN SCHUMAKER, EMILY SHAPIRO and IVAN PEREIRA, ABC News(NEW YORK) — A pandemic of the novel coronavirus has now infected more than 100.2 million people worldwide and killed over 2.1 million of them, according to real-time data compiled by the Center for Systems Science and Engineering at Johns Hopkins University.Here’s how the news is developing Wednesday. All times Eastern:

January is now the deadliest month of the coronavirus pandemic for the United States.

So far this month, 79,261 people have lost their lives to COVID-19 in the U.S., surpassing December’s record 77,124 deaths, according to real-time data compiled by Johns Hopkins University.

December still holds the record for the highest number of diagnosed COVID-19 cases.

The official commemoration of the 76th anniversary of Auschwitz’s liberation will be held online Wednesday due to the coronavirus pandemic.

The Auschwitz-Birkenau State Museum and Memorial, which is located on the site of the Nazi concentration camp in Oswiecim, Poland, is closed for visitors until at least Jan. 31 under COVID-19 restrictions set by the Polish government.

“Due to the coronavirus pandemic, the commemoration will exceptionally not be held at the Memorial, but in the virtual space,” Auschwitz Memorial spokesperson Pawel Sawicki said in a statement Tuesday evening. “The main theme of the 76th anniversary of the liberation will be the fate of children in Auschwitz.” The online events will include testimony from survivors as well as a guided virtual tour of the Auschwitz Memorial, “aimed at enhancing the educational value for visitors from around the globe,” according to Sawicki.Auschwitz, also known as Auschwitz-Birkenau, was a complex of over 40 concentration and death camps run by Nazi Germany in occupied Poland amid the Holocaust during World War II. It was the largest of the Nazi concentration camps and extermination centers. More than 1.1 million men, women and children lost their lives there, mainly Jews, according to information on the Auschwitz-Birkenau State Museum’s website.In January 1945, as Soviet Russia advanced deeper into Nazi-occupied Poland toward the end of the war, Nazi officers organized a forced evacuation of the Auschwitz prisoners. Almost 9,000 prisoners, most of whom were sick or suffering from exhaustion, were deemed unfit to join the death march to Germany. The Nazis intended to kill them all as part of attempts to destroy the evidence of their crimes at Auschwitz, but only managed to murder about 700 Jewish prisoners between the departure of the final evacuation column and the arrival of Soviet forces.Soviet troops entered Auschwitz on Jan. 27, 1945, a day now commemorated as International Holocaust Remembrance Day, and liberated more than 7,000 survivors, according to the museum’s website.

Jan 27, 5:39 amGambia vows to name and shame those flouting COVID-19 rulesForty people in Gambia who tested positive for COVID-19 over the past week have refused to self-isolate or have escaped treatment centers, according to the country’s health ministry, which vowed to reveal the identities of those flouting public health regulations.Officials are also aware of a “large number of travelers who recently arrived” in the small West African nation from countries considered COVID-19 hotspots and “have refused to abide to official protocols and/or report to the health authorities for the mandatory test upon arrival,” said Modou Njai, director of health promotion and education at Gambia’s Ministry of Health.”The Ministry continues to treat these matters with utmost and grave concern and thus, the Ministry is hereby giving an order and ultimatum to all those concerned, that they are required to report themselves to the health authorities with immediate effect and failure of which will lead to serious consequences, including the publication of names and identifying information of all those at large,” Njai said in a statement Tuesday.”The Ministry would like to stress that this serious and ruthless misconduct will no longer be condoned under any circumstances,” he added. “Anyone found not willing to cooperate with COVID-19 regulations will have their names and identifying information published on the media and thereafter, drastic measures will be taken against anyone that is non-compliant.”Gambia, home to some 2.3 million people, has confirmed 4,008 cases of COVID-19 since the start of the pandemic, including at least 128 deaths, according to the latest data from the health ministry.

Jan 27, 4:06 amUS reports over 142,000 new casesThere were 142,511 new cases of COVID-19 confirmed in the United States on Tuesday, according to a real-time count kept by Johns Hopkins University.Tuesday’s case count is far less than the country’s all-time high of 298,031 newly confirmed infections on Jan. 2, Johns Hopkins data shows.An additional 3,990 fatalities from COVID-19 were registered nationwide on Tuesday, down from a peak of 4,462 new deaths on Jan. 12, according to Johns Hopkins data.COVID-19 data may be skewed due to possible lags in reporting over the Martin Luther King Jr. Day holiday weekend.A total of 25,443,700 people in the U.S. have been diagnosed with COVID-19 since the pandemic began, and at least 425,216 have died, according to Johns Hopkins data. The cases include people from all 50 U.S. states, Washington, D.C., and other U.S. territories as well as repatriated citizens.Much of the country was under lockdown by the end of March as the first wave of the pandemic hit. By May 20, all U.S. states had begun lifting stay-at-home orders and other restrictions put in place to curb the spread of the novel coronavirus. The day-to-day increase in the country’s cases then hovered around 20,000 for a couple of weeks before shooting back up over the summer.The numbers lingered around 40,000 to 50,000 from mid-August through early October before surging again to record levels, crossing 100,000 for the first time on Nov. 4, then reaching 200,000 on Nov. 27 before nearing 300,000 on Jan. 2.So far, the U.S. Food and Drug Administration has authorized two COVID-19 vaccines for emergency use — one developed by U.S. pharmaceutical giant Pfizer and its German partner BioNTech, and another developed by American biotechnology company Moderna and the National Institute of Allergy and Infectious Diseases.Copyright © 2021, ABC Audio. All rights reserved.

Texas doctor discusses firing over alleged COVID-19 vaccine theft: ‘I did what I believe was expected’