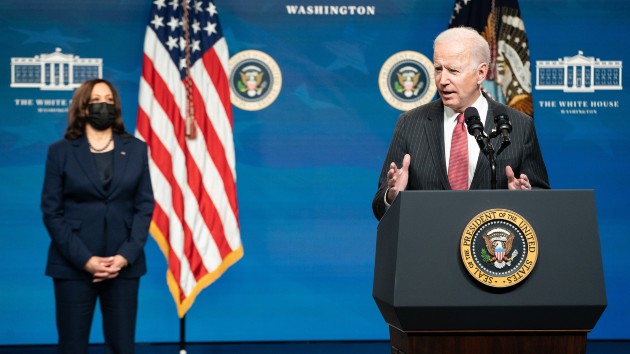 (WASHINGTON) — Friday is Day 45 of the administration of President Joe Biden and Vice President Kamala Harris.

Here is how the day is unfolding. All time Eastern:

White House press secretary Jen Psaki weighed in on the change that would extend unemployment benefits through September at a reduced rate of $300 per week in a new Twitter thread, saying Biden supports the changes that together “would provide more relief to the unemployed than the current legislation.”

The President believes it is critical to extend expanded unemployment benefits through the end of September to help Americans who are struggling, as the President proposed in the American Rescue Plan.

“The President believes it is critical to extend expanded unemployment benefits through the end of September to help Americans who are struggling, as the President proposed in the American Rescue Plan. The compromise amendment achieves that while helping to address the surprise tax bills that many are facing by eliminating the first $10,200 of UI benefits from taxation for 2020. Combined, this amendment would provide more relief to the unemployed than the current legislation,” Psaki said over two tweets.

The Senate has begun voting on amendments to the COVID-19 relief bill as part of a vote-a-rama.

The first amendment up for voting, introduced by Sen. Bernie Sanders, I-Vt., would increase the minimum wage to $15 per hour over five years. Senators will vote on whether to even consider the amendment in a process vote, after Sen. Lindsey Graham, R-S.C., raised an objection to the amendment saying it was out of order in this fast-track reconciliation process. It would take 60 votes in the Senate to consider the amendment, something not likely to happen with the narrow Democratic majority.

“If people here want to vote against raising the minimum wage they have that right. … But we should not shuffle off that responsibility to an unelected staffer. That’s wrong,” Sanders said, referring to the chamber’s parliamentarian ruling that a straight increase of the hourly minimum to $15 was out of bounds under reconciliation.

Republicans have offered 1,008 other amendments to the bill.

Senate Democrats have agreed to an extension in jobless benefits through September at a reduced amount of $300 a week in the COVID-19 relief bill, according to two Democratic aides. The House bill originally included weekly benefits of $400 through August.

The agreement also “provides tax relief to workers who received unemployment insurance compensation by making the first $10,200 of benefits non-taxable for the first time to prevent surprise bills for unemployed at end of year,” according to a Democratic aide.

In advance of Friday’s vote-a-rama on the COVID-19 relief bill, Senate Majority Leader Chuck Schumer said Democrats are prepared to press on without Republicans while Senate Minority Leader Mitch McConnell continued to characterize the bill as a “liberal wish list”.

Schumer set the stage for a long night but said the Senate will remain at it “no matter how long it takes.” McConnell also hinted that it could take quite a while, with senators proposing various amendments, saying that Republicans “have many ideas to improve the bill, many ideas.”

As he has in days past, McConnell again criticized Democrats for moving forward without GOP support.

“This isn’t a pandemic rescue package, it’s a parade of left-wing pet projects they’re ramming through during the pandemic,” McConnell said.