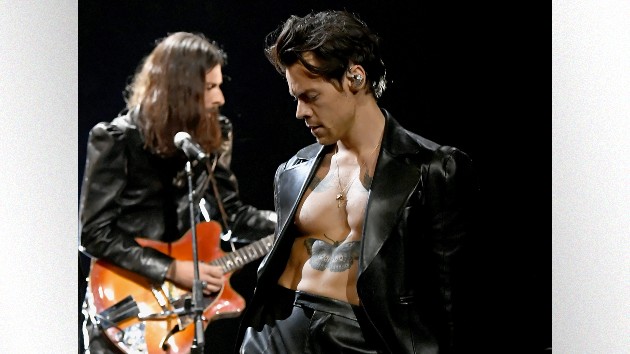 Harry Styles seems to be everyone’s favorite imaginary boyfriend, so if a British tabloid is to be believed, you’ll be happy to hear this latest news.

The Sun alleges that in his upcoming film My Policeman, Harry will be showing major skin in steamy gay sex scenes with co-star David Dawson.

Set in the ’50s, when homosexuality was illegal in the U.K., the film is about a policeman, Tom Burgess — played by Harry — who marries a schoolteacher, played by The Crown’s Emma Corrin.  When Tom starts an illicit affair with another man, played by Dawson, his wife tries to have her husband’s lover arrested.

The film has reportedly just started shooting, and a source tells The Sun, “Harry will be having sex on screen and they want it to look as real as possible…Not much is going to be left to the imagination.”

“Harry is throwing himself into this new role and is really excited about the challenge, even though it’s a daunting task,” adds the source. “He always wants to do things that people wouldn’t expect and challenge what people think about him — and this film will really do that.”

Of course, since this is a report in a British tabloid, don’t be disappointed if Harry doesn’t actually bare all when the movie finally hits theaters or streaming.

Ally Brooke says being in Fifth Harmony was a “traumatizing” experience

BTS To Perform ‘Butter’ At The 2021 Billboard Music Awards