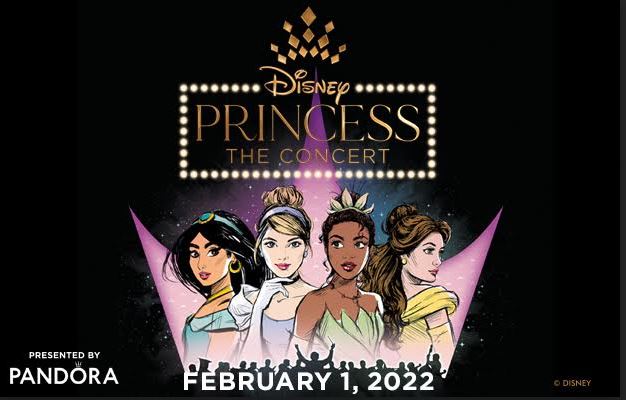 (Enid, OK) Disney Concerts presents Disney Princess — The Concert, a nationwide tour making it’s stop in Enid on February 1, 2022.   Disney Concerts assembles an all-star quartet of Broadway and animated film icons, their magical Music Director and enchanting Prince celebrate all the Disney Princesses in an unforgettable evening of songs, animation, and stories.  Presented by Pandora Jewelry, The Official Charm Bracelet of the Walt Disney World® Resort, tickets and VIP packages for this concert of a lifetime go on sale Friday, May 7 at 10:00am at StrideBankCenter.com.

The concert will start at 7PM, with doors opening to the public at 6PM.  Tickets range from $29 to $85 and can be purchased on the second floor of convention hall or StrideBankCenter.com starting at 10AM on Friday.

Fans are encouraged to dress up in their best royal attire for an unforgettable evening. Dreams will come true as these acclaimed performers sing over 30 favorite Disney Princess songs, and share their exclusive, hilarious and heartfelt behind-the-scenes stories from their time on the stage and screen.  Larger than life animations and visuals accompanying the music will immerse the audience in pure Disney magic.

Disney Princess – The Concert is based on the established touring production Broadway Princess Party®, which began as a cabaret show at Feinstein’s/54 Below in NYC in 2015. It garnered critical success and a loyal fan base, including over 20 million views on YouTube. This new venture is co-produced by Disney Concerts with Broadway Princess Party, LLC, as led by partners Susan Egan, Laura Osnes, Benjamin Rauhala, and Courtney Reed.