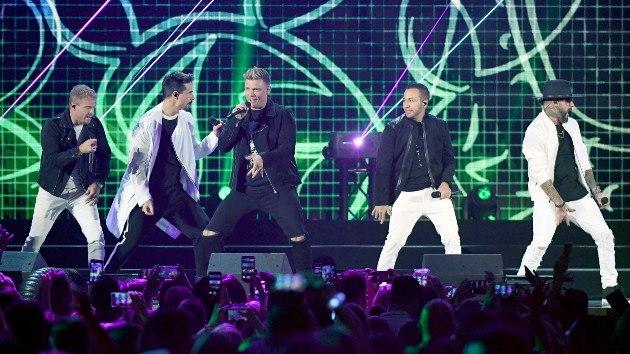 Several months ago, the Backstreet Boys confirmed that, at long last, they planned to record their very first Christmas album. Now, AJ McLean tells Variety that the project is coming along even better than he’d hoped.

The sessions for the album were the first time the group had been able to get together since their DNA World Tour was called off in March of 2020 due to the COVID-19 pandemic.

“It was a really happy, jolly experience,” AJ tells Variety of being in the studio with Howie, Kevin, Brian and Nick. “There was a Christmas tree and our names on stockings hanging on a fake fireplace.”

“This is our first ever Christmas album in [our] 28 year [career] — it’s nuts,” he adds. “It’s turning out to be a fricking gem, so I cannot wait for our fans to hear it.”

AJ spoke to Variety while performing at a benefit show alongside *NSYNC‘s Chris Kirkpatrick and Jeff Timmons of 98 Degrees.  While Chris admits he used not be able to stand AJ, they’re now pals, and AJ even describes himself, Chris and Jeff as “the Three Stooges.”

So what about the ultimate boy band joint project?  Jeff jokes to Variety, “We’re gonna announce the 98 Degrees/Backstreet/*NSYNC World Stadium Tour, come 2022,”  but adds, seriously, “We’ve always admired them and certainly would love to do something with all three together.”