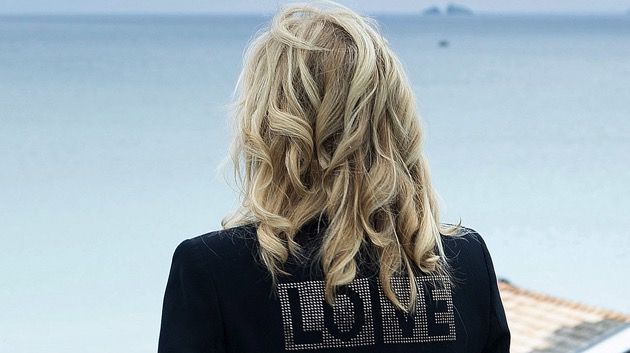 (CORNWALL, England) — It’s not just a big week abroad for the president — first lady Jill Biden also is making her debut on the international stage.

And on Thursday, in her first full day in the United Kingdom for a summit with global leaders, she sent a message with her wardrobe.

When she and her husband joined British Prime Minister Boris Johnson and his wife, Carrie, for a stroll outside Carbis Bay Hotel in Cornwall, she sported a jacket with “LOVE” emblazoned on the back.

“We’re bringing love from America,” she told reporters. “This is a global conference and we are trying to bring unity across the globe and I think it’s needed right now, that people feel a sense of unity from all the countries and feel a sense of hope.”

Just as the president is stressing how world leaders can work together — unlike former President Donald Trump — Jill Biden’s wardrobe choice (she wore the same jacket at her husband’s presidential campaign kickoff rally in 2019), is in sharp contrast to Melania Trump’s debut at her husband’s first G-7 summit, where she was criticized for wearing a designer jacket that listed for $51,500.

Later in 2018, Trump drew fire when, leaving for a visit to detention centers for migrant children in Texas, she wore a jacket that read, “I really don’t care, do u?”

Also unklike Melania Trump, who shied away from the spotlight, Biden was open and talkative with reporters.

Asked how her husband is preparing for his one-on-one with Russian President Vladimir Putin next week, she jokingly called him “over-prepared.”

“I think he’s so well prepared. I mean he’s, you know — we, he’s been studying for weeks, you know, working up to today,” she said. “Of course, he knows most of the leaders that — that will be here, and Joe loves foreign policy. This is his forte, so I think the meetings are going to be great.”

For Jill Biden, the time in the spotlight on the world stage is a marked shift from her start in politics as a reluctant senator’s wife — a role she embraced over Biden’s nearly 50-year career, highlighting issues of importance to her like military families and education.

At the couple’s first stop in the U.K. on Wednesday, at Royal Air Force Mildenhall, the first lady spoke before the president, recalling how she came from a military family herself, and delivering an impassioned plea on the need to support them.

Speaking to 1,000 airmen, airwomen, and their spouses and children in the audience, she said, “Our military families may not wear a uniform, but you are as crucial to our military as radar is to a fighter jet.”

She explained how supporting military families by providing support for entrepreneurship, quality child care, food and mental health resources was one of her top priorities and said her initiative as first lady will help make sure that the families of service members, including those stationed abroad, deserve America’s backing.

“Our military is a community bound together by love,” she added. “Love for our country. Love for the men and women who served beside you, your husbands and wives, your moms and dads, and love for the communities that you build together.”

She also raised Joining Forces, an initiative for military families she and Michelle Obama founded in 2011, and restarted as first lady ahead of taking part in some events related to that work over the next few days.

To highlight her cause en route to the U.K., she tweeted, “Prepping for the G7,” along with a photo of her reviewing a binder on Air Force One.

While Biden met with British Prime Minister Boris Johnson on Thursday, she took tea with her counterpart, Carrie Johnson. Plans to tour St. Michael’s Mount off the coast of Cornwall had to be canceled due to poor weather.

She will then take part Friday in welcoming events at the G-7 summit — the first meeting of the world’s leaders in two years due to the deadly coronavirus pandemic.

On Saturday, she’s slated to hold a discussion with members of Bude Surf Veterans, a volunteer group that assists U.K. military veterans with physical or mental health injuries through surfing.

On her final day, the first lady and the president will meet Her Majesty Queen Elizabeth II at Windsor Castle.

“Joe and I are both looking forward to meeting the Queen, and that’s an exciting part of the visit for us,” Biden said Thursday.

She’s also slated on Sunday to meet with U.K. veterans who participated in Walk of America, a 2018 event led by Walking with the Wounded in which three veterans from the U.S. and three veterans from the U.K., walked 1,000 miles across the U.S. to share the stories of wounded, ill, or injured service members. The first lady served as the patron of the expedition and joined the participants in St. Louis at the time.

Turning 70 last week in Rehoboth Beach, Delaware, Biden is the oldest sitting first lady in modern history, and the first to hold a paid job outside of the White House, continuing her longtime career as a community college English teacher.