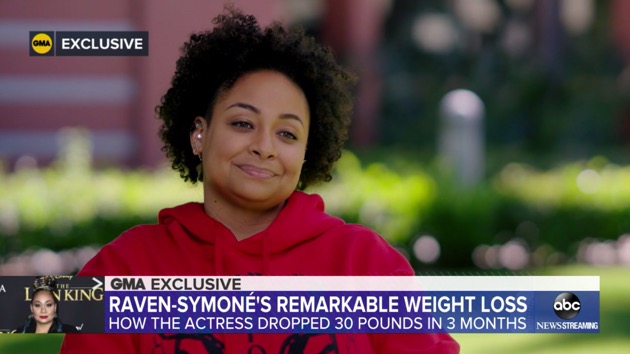 (NEW YORK) — Raven-Symoné is feeling better than ever after losing 30 pounds in just three months and she opened up about her journey in an exclusive interview with Good Morning America Friday.

“I’m not over here trying to be a little twig,” the That’s So Raven alum told GMA. “I’m not trying to be, like, ‘Oh my God, look at me.’ I have a goal in mind and it’s not just weight loss, it’s really complete body health.”

The 35-year-old explained she’s “low carb as much as I can be” and she does “very minimal exercise.” One of her tricks is being “an avid faster,” adding that she will make sure she has “a minimum of 14-hour fast” between dinner and breakfast.

Symoné also goes on longer fasts, a method she has carefully educated herself on, and she gets through them by drinking lots of water and electrolytes as well as having some bone broth if things get difficult.

“I don’t try to speak for anybody else,” she said, noting that this is her formula and what works for her.

Symoné has been in the spotlight since the age of 3, starring on The Cosby Show, being a Disney Channel teen sensation, and then co-hosting The View for three seasons as an adult. With that fame came stress and emotional eating.

The actress recalled a time in 2011 when she was had lost 70 pounds but felt that she couldn’t celebrate her achievement.

“The way people were treating me while I was bigger was emotionally damaging,” she said. “So when I lost weight … and I remember the moment I went on the red carpet and in my head I was cussing everyone out. I’m like, ‘Wow, now you want to look at me because I’m skinny, thanks."”

Symoné said losing weight this time isn’t about fitting into smaller-sized jeans — it’s about being healthy now to ensure a healthier future for herself and her life with wife Miranda Pearman-Maday.

“Every time I lost weight in the past, it was about size,” she said. “I’ve been a part of the Hollywood industry machine and I didn’t understand why every time I dieted I would gain weight later.”

The Raven’s Home star said she didn’t want to develop heart disease or type 2 diabetes as a result of her weight, adding, “I want to make sure that my body is healthy and prepared to deal with old age, ultimately, and I have to start now.”

“I believe that anyone can do it and I believe when you understand why, you have great willpower,” she continued. “I feel like this is something that will sustain my life for a lot longer.”

Symoné’s wife, whom she married last summer, is there to support her along the way — and the two are embarking on a new journey together: Letting fans into their lives with their new YouTube channel, titled 8PM.

Symoné chimed in, “You’re going to be seeing what a life with a lesbian, multiracial couple looks like — and it looks normal, you guys. It looks pretty normal.”

These days, the three-time Daytime Emmy Award nominee is also putting her talents to use behind the camera, having directed a powerful episode of Disney Channel’s Sydney to the Max that explores the social impact of microaggressions.