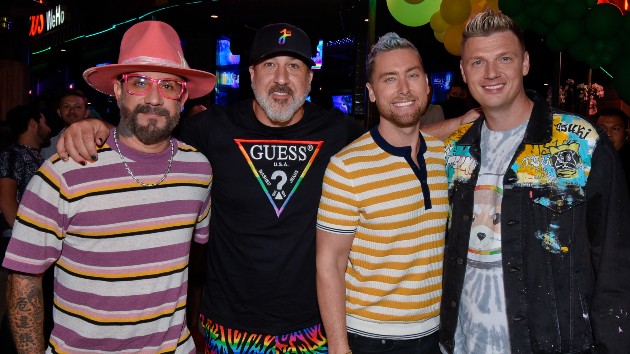 It looks like fans of the Backstreet Boys and *NSYNC may get their boy band reunion after all.

Nick Carter, Lance Bass, AJ McLean and Joey Fatone recently got together in support of Pride month, but what really got fans excited was the possibly of a joint album from the foursome, which AJ teased on TikTok.

When asked to elaborate on the potential collaboration, the BSB star told Entertainment Tonight, “I said that we’re, you know, maybe cooking something up.”

“This could be something, maybe, I don’t know…We’re definitely cooking. There’s been a lot of positive feedback from the fans,” AJ added.

“Look, a lot of fans for the last almost 30 years have wanted to see this happen in any level, whether it’s all 10 of us or four of us, whatever that is,” AJ continued. “And now that it’s happening, even if it’s just one time, I don’t know, this may not be just a one-off.”

In addition to discussing the potential for new music, AJ cleared up the common misconception that the two boy bands hated each other.  He shared that they’re all actually in a group chat together.

“Back then there was no social media, there was none of that stuff,” he noted. “So, press and media then pitted us against each other because look, same label, same management for a brief period of time. And we’re all from Orlando. So, like, there was a lot of the parallels and we were very similar. Same producers. But there was still a difference between the two of us, you know? … I mean, there’s a mutual respect.”