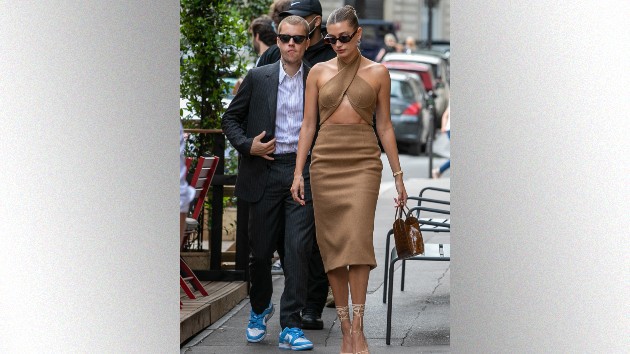 We’re not sure how or why it happened, but Justin Bieber and his wife, Hailey, who’ve been vacationing in Paris, ended up meeting French President Emmanuel Macron and his wife, Brigitte, on Monday.  But when Justin posted a photo of the four of them posing together, many fans expressed their displeasure at what the couple chose to wear to the meeting.

According to E! Online, the meeting took place at the president’s residence, the Elysée Palace. Monday was the annual Fête de la Musique, or Music Day, in France, which might be why the Biebers were there.  As the New York Post reports, Justin wore a Celine pinstripe suit and buttoned-up shirt, but he accessorized it with a silver necklace and blue-and-white Jordan 1 Low sneakers.

As for Hailey, the Post says she wore a nude-colored LaQuan Smith dress and strappy Femme stiletto heels, but the halter top of the dress left her abs completely bare.  The look drew ire from several fans.

“When you go to the Elysée you don’t put on normal clothes, is that too hard to understand?” wrote one fan in the comments, adding, “Do you have no sense of respect for the president[?]…Concerts and events are [one] thing, the presidential palace is another. Respect France you morons.”

And after one fan commented “#boss,” another one replied, “boss of what…[?]. immaturity? no class?”

“what’s embarrassing is letting people dressed like that enter the Elysee Palace…France is hitting rock bottom,” another wrote.

“It’s shameful,” added yet another.

According to The New York Post, someone else wrote, “Wifey’s pretty and all but should have dressed for the occasion,” while another added, “This is dope but I’m having trouble with the attire.”