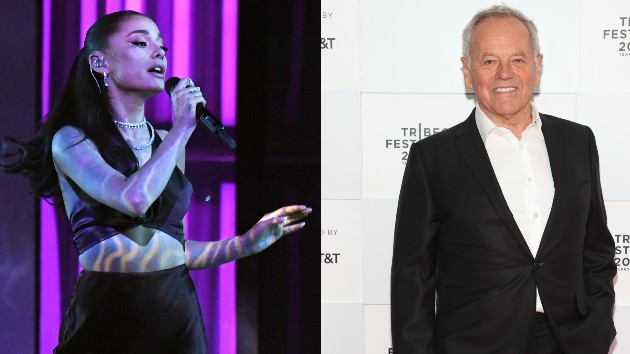 With all the years he’s spent cooking for the stars, you’d think celebrity chef Wolfgang Puck would know who’s who. But Puck admits that when Ariana Grande visited his restaurant in L.A. recently with her husband Dalton Gomez and some friends, he thought they were a bunch of underage students…and even carded them.

Speaking to Insider, Puck says, “There was a table of young people — girls and boys and everybody — and I talked to them; I thought that maybe they were in school or in college or whatever.”

Puck recalls that he said something like “Oh, no school today, you’re all out celebrating,” and even asked them if they had IDs, because they were drinking, and he thought they were too young to do so.

When Puck walked away from the table, a waiter told him that the group wanted him to come back for a photo, which he agreed to do, still not knowing who the diners were.

“So I go back — you know, I’m always polite, people like a picture — and then they said, ‘Oh, this is Ariana Grande, she wants to take you to a karaoke place and sing!"” Puck laughed. “I said, ‘Well, I think I’d take her in the kitchen and teach her how to cook before [I’d do that]!"”

After being clued in to his famous guests’ identities, Puck correctly captioned the photo on his Instagram: It reads, “Always a pleasure having good company at @hotelbelair! Thank you for coming by @arianagrande!“

For the record, Ariana will be 28 on Saturday; her husband is 25.

Puck is the subject of the new Netflix documentary Wolfgang, streaming Friday on Disney+.