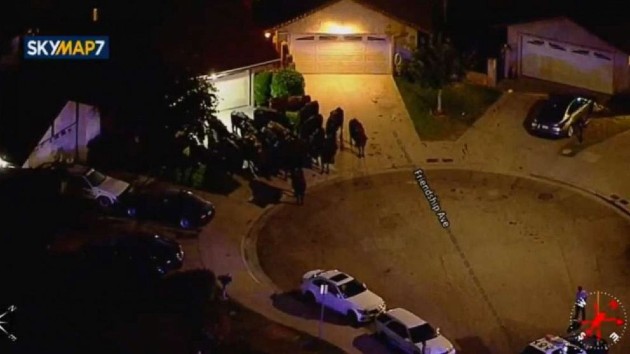 (LOS ANGELES) — A herd of at least 34 cows ended up stampeding through a neighborhood in Los Angeles after somehow managing to escape from a slaughterhouse in the area.

The incident occurred at approximately 8:35 p.m. on Tuesday, June 22, in Pico Rivera, California, when the Los Angeles County Sheriff’s Department responded to calls that several cows were in the area and reportedly running down streets, cutting through neighborhood yards and trampling bushes, according to ABC News’ Los Angeles station KABC-TV.

One person was injured in the city stamped and one cow was shot and killed by a deputy during the incident when Pico Rivera City Manager Steve Carmona said it appeared the cow was making a move to run over a baby, according to reports from KABC.

Los Angeles County Sheriff’s Department deputies were called to the scene to help corral the wandering animals and warned people to “steer” clear of the area while the incident was ongoing.

It took authorities about two hours to move the herd into trailers and by 10:20 p.m., the Los Angeles County Sheriff’s Department said that most of the cows had been detained, though one wily cow was reportedly on the loose until after 11 p.m.

Most of them were eventually caught at the end of a cul-de-sac in Pico Rivera and, at one point, KABC managed to get aerial footage of at least 20 cows standing on one driveway in the area.

“All I know is that they were running for their lives and they are probably free for the very first time and anybody would want to escape,” witness Ginger Gaxiola told KABC in an interview regarding the incident.

It is believed the cows somehow managed to escape from a local slaughterhouse in the area but the investigation into how they managed to all escape at the same time is currently ongoing.