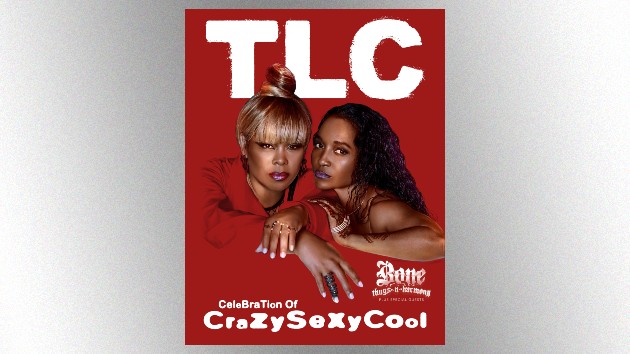 Run, don’t “Creep” to get your tickets to the ’90s nostalgia concert of the year.

TLC — T-Boz and Chilli — are hitting the road for their Celebration of CrazySexyCool National Tour, which kicks off September 3 in Alabama.  The outing, which will visit 18 cities to start, will feature the ladies singing songs from their now-iconic 1994 album CrazySexyCool, as well as their other hits.

The shows will be ’90s themed and feature ’90s fashion, surprise guests and fan interaction.  Bone Thugs N’ Harmony will open the shows, with other acts on different dates.  More shows are expected to be announced; tickets go on sale June 25.  Check LiveNation.com for updates and more info.

“I’m so excited for this tour because we’ve been talking about doing something special for CrazySexyCool for years and FINALLY, we get to do it!” says Chilli in a statement. “This is the album that truly put us on the map and showed the world who we really are. So, this will be quite the celebration!”

CrazySexyCool, TLC’s second studio album, has sold more than 14 million copies since its release in November of 1994. In fact, it’s the best-selling album by an American girl group, period.  It features the hits “Red Light Special,” “Creep,” “Diggin’ on You” and, of course, the number-one classic, “Waterfalls.”

Adele named one of ‘TIME”s 100 Most Influential People