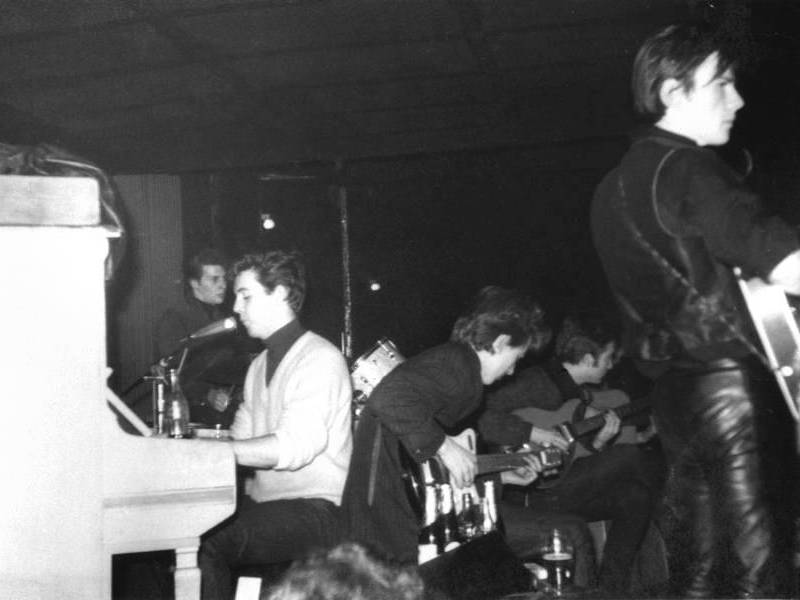 Today (June 23rd) marks what would have been original Beatles bassist Stuart Sutcliffe's 81st birthday. Sutcliffe left the group in the summer of 1961 to continue art college in Hamburg, Germany. He died of a cerebral hemorrhage on April 10th, 1962 at the age of 21, with most sources attributing his death to a blow to the head which he received after a post show run-in with local Liverpool thugs — not John Lennon as has been often been incorrectly reported. In the months leading up to his death, Sutcliffe, whose brain was literally swelling against his skull, would fall into incredible fits of rage due to the pain, and was often rendered blind by the agonizing attacks.

Sutcliffe, an award-winning painter was John Lennon's best friend and classmate at the Liverpool College of Art. It was with the prize money he earned from the sale of his work that Lennon, Paul McCartney, and George Harrison — then still known as alternately as the Quarrymen and/or Johnny & The Moondogs — convinced Sutcliffe to purchase a sunburst Hofner President 500/5 model bass guitar. According to numerous sources, it was Sutcliffe who named the band, "The Beatals" — spelled with two "a's." Paul McCartney recalled Stuart Sutcliffe joining the group in the spring of 1960: ["Stuart was John's friend, mainly, from art college. Stuart was a very good painter. We were all slightly jealous of John's friendship — John being a little bit older, certainly than me, certainly than George — you wanted to sit next to him on a bus and stuff. Like, he's the older fella, y'know — it's just the way it was. So, when Stuart came in, he was taking a little of that position away from us. We, sort of, had to take a little bit of a backseat."] SOUNDCUE (:21 OC: . . . of a backseat)

Lennon's first wife, Cynthia Lennon, went to art school with Lennon and Sutcliffe and shortly before her 2015 death, told us that their personalities balanced each other out perfectly: ["What John gave Stu was the ability to laugh at himself and have humor, because he was such a serious student. And what Stuart gave John was a kind of. . . he was inspirational. I mean, John had no faith in his abilities to do anything serious — or complete anything. And Stuart was constantly supporting him."] SOUNDCUE (:19 OC: . . . constantly supporting him)

She said that even while still in her teens, she was able to recognize Sutcliffe's brilliance as a painter: ["Stuart was special. He was in art college with us. He was the most brilliant student. He was awesome, the stuff that he did. And he was a gentle, gentle young man."] SOUNDCUE (:12 OC: . . . gentle young man)

Sutcliffe, who was only a member of the Beatles for 15 months — from May 1960 to August 1961 — toured with the band in Scotland for their first out-of-town dates and was part of their legendary and historic Hamburg residency.

Although barely competent on the bass guitar when he first joined the group, Sutcliffe reportedly became a good enough bassist that he had offers to join other Liverpool groups after leaving the Beatles.

Sutcliffe's lone solo spot in the Beatles' stage act was a cover of Elvis Presley's "Love Me Tender." His bass work with the Beatles is featured on several tracks on the group's 1995 Beatles Anthology 1. Paul McCartney became the band's bassist after Sutcliffe's departure and his original Hofner bass is now in the possession of his and the Beatles' close friend and collaborator, Klaus Voormann.

Howie Edelson the co-host of the cutting edge hit Beatles podcast Fabcast, recently devoted an entire episode to the band's Hamburg era. In the show, titled "Leather," he explained how the group's pre-fame Hamburg recordings were shaped by the band's live work in Germany: ["Y'know, they're so tight. Even with a lousy drummer, they're still so tight, and their harmonies — that's the thing also; they knew how to work a mic. The way they moved their bodies around a mic. They knew how to do this thing from hours and hours and hours on stage. Work — standing up — work! They're 19-years-old, 20-years-old; no nights off — 'we're on tonight, this is what we're doing with our lives' — everybody else was working in a factory and then going to a bar."] SOUNDCUE (:32 OC: . . . to a bar)

Original Beatles drummer Pete Best along with John Lennon and Paul McCartney had flown to Hamburg on April 13th, 1962 — just three days after Stuart's death. Expecting to find Stuart and his fiancee, photographer, Astrid Kirchherr at the airport to greet them they were devastated to learn from Astrid that Stuart was in fact dead. Pete Best recalled the emotional scene: ["Very upsetting — that's the only way I can put it. I don't wanna dwell on (or) try to describe the scene or. . .  It upset John tremendously, and Paul and I were also deeply upset by, y'know, the tragedy, which had befallen Stuart."] SOUNDCUE (:13 OC: . . .had befallen Stuart)

Astrid Kirchherr died of cancer on May 12th, 2020 only days before her 82nd birthday.

FABCAST Howie Edelson On The Beatles Learning Their Craft :

Expanded version of 1982 Police documentary ‘Around the World,’ plus soundtrack album, released today

The Police ‘Around The World’ Restored & Expanded