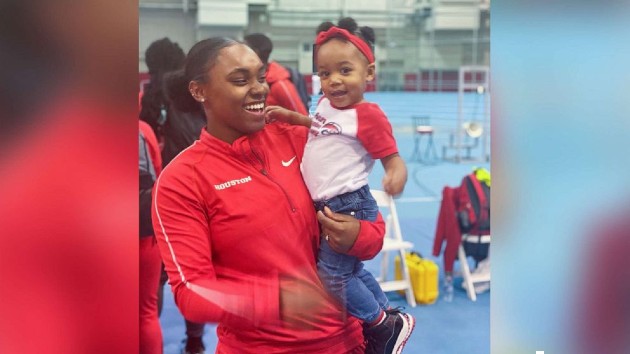 Mikaila Martin via University of Houston

(NEW YORK) — When Mikaila Martin competes Thursday at the U.S. Olympic track and field trials in Eugene, Oregon, she will have her biggest fan rooting her on, her 3-year-old daughter Camryn.

Martin, 24, gave birth to Camryn when she was 21 and in the middle of a standout track and field career at the University of Houston.

“I was a junior in college when I gave birth and was on a scholarship for athletics,” Martin told ABC News’ Good Morning America. “A part of me was worried about it.”

Martin, already a record-setting hammer thrower for Houston, put her athletic career on hold when she gave birth to Camryn and redshirted for a year, meaning she sat out one season of eligibility.

After that season was over, Martin jumped right back into being a mom and a student-athlete.

“Before I had Camryn, my day was already hectic,” said Martin. “After I had her, I had to sit down with myself and make a schedule of how my day would look like so I could see it on paper.”

For the past three years, a typical day for Martin has included waking up around 6 a.m. to take Camryn to an off-campus day care, then going to track practice, followed by a team meeting and then her school classes. At the end of the day, she picks Camryn up, takes her home for dinner and a bath, then does bedtime for Camryn and tackles her own homework.

As a college student, Martin also had to take on a part-time job on the weekends to afford day care for Camryn. She relies on her mom and sister to help care for Camryn while she works, saying, “It really takes a whole village.”

During the coronavirus pandemic, Martin took classes on Zoom with Camryn at home, and had to get creative when it came to continuing to train.

“I would find a nearby park and let her play and then put her in the wagon while I did some training,” said Martin. “During the pandemic, it was really, really a struggle.”

The hard work paid off for Martin both academically and athletically.

She is now completing a graduate degree in human resources and will graduate next May.

Martin finished 12th in the hammer throw at the NCAA outdoor track and field championships earlier this month, which earned her a berth in the U.S. Olympic trials.

She is also the first University of Houston woman to earn All-America honors in the hammer throw.

“My daughter kept me motivated. Every day I got up I was like, ‘I’m doing this for her,"” said Martin. “I don’t want her to feel like momma couldn’t do it. I wanted her to see that I did it.”

Martin described Camryn as the “team baby” and said she is a frequent presence on the sidelines at her track and field meets.

“All my teammates just welcomed her in and that’s when I was like, ‘OK, I’m meant to do this,"” Martin said. “She runs around everywhere and everyone takes her everywhere [at the meets]. She’s in heaven.”

Will Blackburn, associate head coach for the Houston track and field program, recruited Martin out of high school and has been by her side as she became a mom.

“When we found out she was pregnant, on our side, nothing changed,” he said. “We thought, ‘Let’s go on, let’s go after your goals and aspirations."”

As a coach, Blackburn said he noticed a change in Martin on the field as her life changed away from it.

“I know it was tough on her, no doubt, in part because the time management was totally different,” he said. “[After becoming a mom] she had an hour or hour-and-a-half practice time and that was it.”

“She was extremely focused and it spilled over into competition,” Blackburn added. “Her focus improved a lot and her skill improved greatly.”

Martin, who plans to go pro after she finishes graduate school, said she has noticed herself how much she has improved as a hammer thrower since becoming a mom.

“In the beginning, I thought, ‘I’m not the same athlete I used to be,’ but I learned to work with my body and once I did that, that’s when things started to come into play,” she said. “And you really are more focused as a mom because before Camryn, I used to be so nervous at track meets, I would shake. Now, I’m so in the zone and focused and I never used to feel like that.”