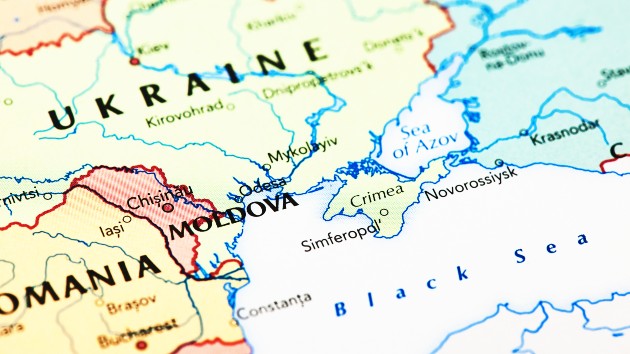 (NEW YORK) — Britain has denied claims from Russia’s military that a Russian patrol ship and fighter jet fired warning shots at a British navy warship as it sailed through waters near Crimea on Wednesday.

The unusual dispute began when Russia’s defense ministry accused the British destroyer HMS Defender of crossing into Russian waters in the Black Sea close to the occupied peninsula on Wednesday morning. The ministry asserted that after the British ship ignored calls to turn around, a Russian coast guard vessel fired warning shots and a Su-24m jet dropped four bombs in the waters ahead of the British warship.

But Britain’s Ministry of Defense has denied that any warning shots were fired and instead suggested Russia was misrepresenting the incident.

“No shots were directed at HMS Defender and we do not recognize the claim that bombs were dropped in her path,” the ministry wrote on Twitter.

The ministry said Russia was conducting a pre-planned naval exercise in the same area at the time and suggested the “warning shots” Russia allegedly fired might have been part of the exercise.

“As is routine, Russian vessels shadowed her passage and she was made aware of training exercises in her wider vicinity,” Wallace said in a statement quoted by the BBC.

But a BBC correspondent on board the HMS Defender said it had been a “deliberate move” to send the warship through Crimean waters, which Russia claims it controls following its 2014 seizure of Crimea. Britain and most of the international community view Crimea as occupied Ukrainian territory.

“We have just completed a transit through Russian occupied Crimea’s territorial waters. This was a deliberate move by the Royal Navy warship,” the defense correspondent, Jonathan Beale, said on the BBC, speaking by phone from the destroyer, which he said was now continuing on to Georgia.

Beale said at times there had been more than 20 Russian aircraft above the ship, including fighter jets, and that a Russian coast guard vessel had maneuvered to try to force the destroyer to change course. Shots were heard, he said.

He did not say if he had seen bombs dropped in the path of the British ship.

The waters around Crimea are a flashpoint in the ongoing war between Russia and Ukraine. Russia seized three Ukrainian naval vessels and their crews in 2018 and has partially blockaded access to the neighboring Sea of Azov for Ukrainian vessels. Tensions around the sea again ratcheted up when Russia amassed tens of thousands of troops near Ukraine as part of military buildup in April that triggered a war scare.

Beale’s account suggested the British ship’s sailing through the Crimean waters was meant as a freedom of navigation gesture intended to signal that the U.K. does not recognize Russian control.

The BBC correspondent said the British crew had been on high alert as they made the passage through the Russian occupied waters.

“At one stage they did put on anti-flash masks to protect their faces, just in case there was going to be an exchange of fire,” he said.

“They didn’t think that would happen and it did not happen. But the Russian jets have taken an interest in this and they had warned the ship not to go into Crimean territorial waters, claiming that they are Russian waters,” Beale said.

Russia’s foreign ministry accused the British ship of a “crude provocation” and of violating international law, adding that it planned to summon the British ambassador over the incident.

“The professional assessment of the dangerous actions of the British navy destroyer in the Black Sea has already been given by our side’s defense ministry. I would like to add that we qualify it as a crude British provocation, that goes against international law and Russian legislation,” Maria Zakharova said in a briefing, according to the Russian news agency Interfax.

Russia’s defense ministry said the incident had occurred near Cape Florient on the coast of Crimea and said the HMS Defender had entered three kilometers into Russian territorial waters just before midday local time. It said the destroyer left the area shortly after shots were fired.

The ministry said it considered the U.K. warship to have violated the UN Convention on the Law of the Sea and urged Britain to investigate, saying that the British defense attaché in Moscow had already been notified of Russia’s position.

Britain’s Royal Navy said earlier in June that HMS Defender had temporarily “peeled away” from a strike group conducting NATO defense exercises in the Mediterranean in order to “carry out her own set of missions in the Black Sea.”

Last week the destroyer docked in the Ukrainian Black Sea port of Odessa, according to Britain’s embassy in Kyiv. The ship’s presence there would likely be seen by Russia as a show of solidarity with Ukraine amid the tensions.

Ukraine’s foreign minister, Dmytro Kuleba, said the incident was a “clear proof” of Ukraine’s position that Russia’s actions in the Black Sea are dangerous.

“Russia’s aggressive and provocative actions in the Black and Azov seas, its occupation & militarization of Crimea pose a lasting threat to Ukraine and allies. We need a new quality of cooperation between Ukraine & NATO allies in the Black Sea,” Kuleba wrote on Twitter.