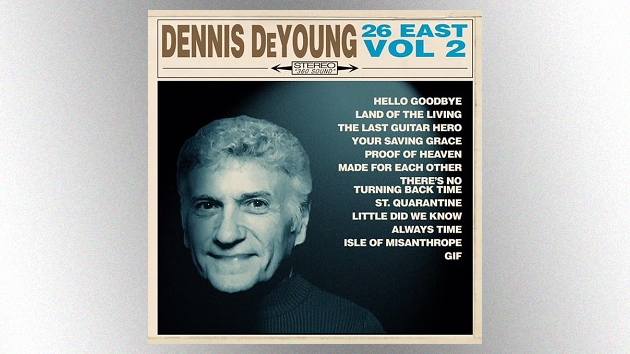 Listening to the 12-track album, Styx fans likely will notice musical and lyrical references to several classic songs by the band, and DeYoung admits to ABC Audio that this was by design.

26 East, Volume 2 begins with “Hello Goodbye,” a tribute to the band that inspired him to become a professional musician…The Beatles.

“I use the titles of some of their songs [in the lyrics], to tell the story that, as a fan, this is what you did to me and to the world,” Dennis points out. “[T]hey were the greatest job creator in the history of mankind for music.”

Volume 2 also features some songs that Dennis wrote after the start of the COVID-19 pandemic that were influenced by the volatile time.

He says that as his final musical statement, he’s proud of the album.

“I think I said my piece. There it is,” Dennis maintains. “To know these songs and these lyrics is to know me as a musician.”

Closing the album is a short tune titled “Grand Finale,” which revisits the lyrics and melody of Styx’s “The Grand Illusion.”

Dennis notes that the tune significantly features his son Matthew playing drums, including a ride cymbal that belonged to late Styx drummer and co-founder John Panozzo.

DeYoung says he felt it was perfect that for “the last song on my recorded career making solo albums…there’s my son and I playing together…and John’s cymbal.”