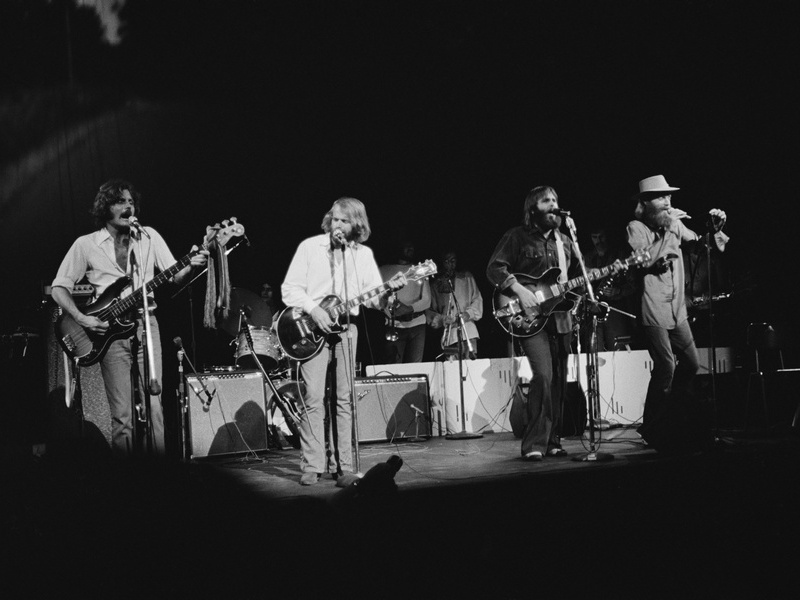 Happy Birthday to Bruce Johnston of the Beach Boys, who turns 79 on Sunday (June 27th). Johnston joined the group on April 9th, 1965 to become the permanent live replacement for the group's leader and bassist Brian Wilson, who had quit the road the previous December to focus solely on songwriting and producing. Soon after Johnston had joined, Wilson featured him prominently on the group's next single, 1965's Number Three hit "California Girls." Johnston's tenor voice was also notably featured in the fadeout of "God Only Knows" from the group's 1966 Pet Sounds album.

Johnston's signature Beach Boys classic, 1971's "Disney Girls," is among the tracks revamped on the recent set, The Beach Boys With the Royal Philharmonic, which sailed to Number One on both Billboard's Classical Albums and Classical Crossover Albums charts.

Bruce Johnston explained why he was so desperately needed out on the road with the group back in 1965: ["Brian Wilson had about 10 jobs. He had to write it, arrange it, produce it, do vocal arrangements. . . and it means you have to stay home to do it. So that kind of opened up a door for me to be on the road — and record, I guess."] SOUNDCUE (:15 OC: . . . record I guess)

Unlike the rest of the Beach Boys, Johnston wasn't raised in the blue-collar suburbs of Hawthorne or Inglewood, California, but in the affluent Bel Air section of Los Angeles, along with high school buddies Jan & Dean. As a teenager, Johnston ventured into Hollywood, hooking up with such aspiring legends as Phil Spector, who invited Johnston to join his first group, the Teddy Bears. Johnston passed on Spector's offer, but later teamed up with Doris Day's son Terry Melcher to record what he called "Beach Boys knock-offs" as the Rip Chords, including "Hey Little Cobra."

Johnston told us that although he rates the Brian Wilson-produced Pet Sounds as the group's masterpiece, he also respected the late '60s work the group did after Wilson backed away from writing for the band: ["With Brian pulling back it kind of brought everybody to the realization that if, y'know, we're gonna keep recording as the Beach Boys we have to have songs to record. Everybody started writing their own songs and they had interesting discoveries about their talent. Y'know, everybody started writing and I kinda found it interesting."] SOUNDCUE (:18 OC: . . . found it interesting)

Johnston quit the Beach Boys in 1972 and explained that it was the group's rampant substance abuse pretty much drove him away: ["That was the drug era that I refused. Without saying who was in it, I'll just tell who wasn't. That was also, Mike (Love) maybe being a little nutty organically with meditation. And Al Jardine was never, ever into alcohol or drugs. So it was a tough time."] SOUNDCUE (:19 OC: . . . a tough time)

He recalled how he returned to the fold — first as a producer, then as a performer — in 1978: ["I suppose I was some sane voice that was kind of on the inside. (And it was) 'Come down and perform a little sane rescue (for the sessions).' Y'know, organize the troops. And that's how it started up. And then, God bless Dennis (Wilson), in the middle of it, he said 'Bruce, get on the plane tonight. We're playing in Mobile. I want you on that stage with us.'"] SOUNDCUE (:21 OC: . . . stage with us)

Beach Boys author Peter Ames Carlin said that Johnston's relationship and opinion of Brian Wilson's work seems to differ between his first stint in the band from 1965 to 1972 and when he re-joined in the late '70s: ["He seemed to understand the significance and importance of Brian's artistry, and what had happened to Brian's work over the years. But when he got back in the band in '79 and everything just kind of shifted, and he became Mike Love's shadow. And way more involved in the commercial side of it and seemed to almost have contempt for Brian."] SOUNDCUE (:19 OC: . . . contempt for Brian)

Johnston told us that he still keeps an active tab on Top 40 radio and says that he's open to most kinds of music — but there are a few things he still won't allow in his home: ["I hate the four-letter word. I love freedom of speech, but I hate four-letter words in music. 'Cause, Little Richard, James Brown and Jimi Hendrix were about as funky as you could ever be — but they never had to swear. I'm not a prude, but freedom of speech — rock on — but not at my house."] SOUNDCUE (:17 OC: . . . at my house)

Apart from being a member of the Beach Boys, Johnston is best known for composing Barry Manilow's 1976 chart topper "I Write The Songs," which earned Johnston the Grammy that year for Song Of The Year.

Aside from his four decades working with the Beach Boys, Johnston has worked with Elton John, Eric Carmen, the Hudson Brothers, David Cassidy, Pink Floyd, and many, many others.

Johnston is the only member of the group's classic lineup still touring with Mike Love as the Beach Boys. The band next performs on July 4th in Fort Lauderdale, Florida at the city's Fort Lauderdale Beach "4th Of July Spectacular."

Bruce Johnston On Profanity In Music :