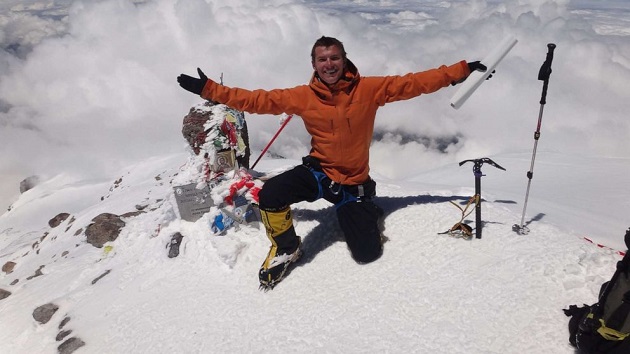 (NEW YORK) — Cason Crane, a mountaineer, and now founder and CEO of Explorer Cold Brew, says founding a company during the pandemic was not the “pandemic pivot” he anticipated.

“I was driven by my obsessive love of cold brew coffee, and honestly, like being stuck at home during the early days of the pandemic wanting that sort of fancy specialty coffee shop type experience that I couldn’t get any more. In addition, I was staying up all night, and I didn’t have a way of modifying or sort of selecting my caffeine levels with the cold brew. So, I created it,” he told ABC News.

While Crane says the pandemic was a transformative year for him personally, he’s no stranger to challenges. Crane is the first known openly LGBT person to climb the Seven Summits.

He climbed Mount Kilimanjaro with his mother in 2008 at age 15. Since then, he has climbed mountains in the United States, New Zealand, Russia, Switzerland, France and Argentina. He is the founder of the Rainbow Summits Project, which ties together his passion for climbing with his advocacy for the Trevor Project, an organization which seeks to stop suicides in LGBTQ youth. The Rainbow Summits Project hopes to raise awareness and funds by climbing the highest peak on each continent, commonly referred to as “the Seven Summits.”

“I was definitely experiencing depression,” Crane said. “I didn’t have those things that I was used to doing and having fun and so it was a way to channel, energy and that passion into something new … I think a lot of people, even if they thought it was a little bit crazy, I think they sort of understood because we all we all had to do things to cope with the adjustments as a pandemic, maybe not all of them were starting a business.”

Cason was not alone in starting a new business under the pandemic lockdown — the increase in applications for new businesses in the U.S. during 2020 hit a 13-year high, according to an analysis of U.S. Census Bureau data by The Wall Street Journal.

Cason says he is prepared to be a founder thanks to his accomplishments as a climber, which he now describes as “entrepreneurial.”

“I think being an entrepreneur can take a lot of different forms and definitions,” he said. “I look back on climbing the Seven Summits, which I did in support of the Trevor Project, which is a phenomenal life-saving organization that supports LGBTQ youth in crisis through a suicide prevention lifeline and other services. And I think of the project of climbing to the summit of Mount Everest bringing the pride flag up for the first time, to all of these seven massive peaks, and that was entrepreneurial.”

Those accomplishments, he said, prepared him to go into business for himself.

“Part of being a good entrepreneur and being a good climber is being able to adjust that definition of success. So I feel so lucky that I had the opportunity to climb the Seven Summits and to support such a phenomenal organization, The Trevor Project through that process. And because it’s allowed me to, I believe have the success with Explorer that I’ve had over the last year.”

Crane, who said he carried the pride flag during his mountain climbs, including to the summit of Mount Everest, said he is also extending his support of The Trevor Project through his new business. During Pride Month, he said his company is donating $1 from every order to the LGBTQ organization.

“The Trevor Project has a lot of different ways that people young people in crisis can get support,” he said. “Young people are significantly less likely to attempt suicide, if they have even one supportive adult in their life. So, to anyone and everyone out there, you can be that one adult, and that’s important. It doesn’t have to be a parent, it can be anyone, so don’t forget that.”