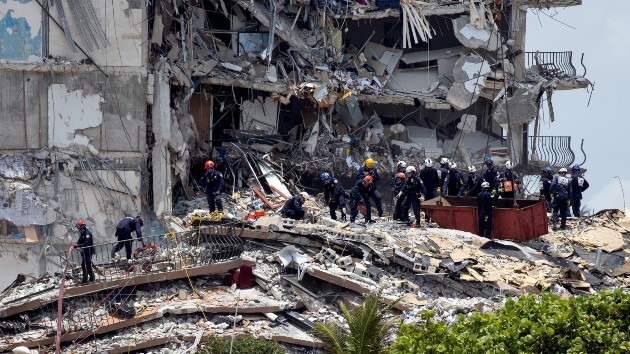 A massive search and rescue operation entered its fifth day Monday, as crews continued to carefully comb through the pancaked pile of debris in hopes of finding survivors. The partial collapse occurred at around 1:15 a.m. local time last Thursday at the Champlain Towers South condominium in the small, beachside town of Surfside, about 6 miles north of Miami Beach. Approximately 55 of the oceanfront complex’s 136 units were destroyed, according to Miami-Dade Fire Rescue Assistant Chief Raide Jadallah.

“We’re digging through … rubbles of concrete the size of basketballs, the size of baseballs,” Jadallah said during a press conference in Surfside on Monday. “It’s going to take time; it’s not going to happen overnight.”

Another body was uncovered in the wreckage on Monday morning, bringing the death toll to 10. Meanwhile,135 people who were living or staying in the condominium at the time of the disaster have been accounted for and are safe, according to Miami-Dade County Mayor Daniella Levine Cava, who noted that the numbers are “very fluid” and “will continue to change.”

“There is going to be a thorough and full investigation of what led to this tragic event,” Levine Cava said during Monday’s press conference. “We are going to get to the bottom of what happened here. Right now, our top priority is search and rescue.”

The remaining structure that still stands was cleared by rescue crews last week and all resources have since shifted focus to the debris, according to Jadallah. Hundreds of first responders and volunteers have been working around the clock to locate any survivors or human remains in the rubble. Crews have cut a 125-foot long, 20-foot wide and 40-foot deep trench through the pile to help enhance their search, according to Levine Cava.

As of Monday afternoon, crews had still not physically reached the bottom of the pile but cameras placed inside showed voids and air pockets where people could be trapped, according to Jadallah, who said they are not yet ready to transition their efforts from rescue to recovery.

More than 80 rescuers are working on the pile at a time, listening for sounds and trying to tunnel through. Miami-Dade Fire Rescue Chief Andy Alvarez, the deputy incident commander overseeing search and rescue efforts, described the process as both frantic and painstaking.

“This is a frantic search to continue to see that hope, that miracle, to see who we can bring out of this building alive,” Alvarez told ABC News in an interview Monday on Good Morning America.

The conditions on the pile are “bad” and “not ideal” for rescuers, Alvarez said, due to heat, humidity and rain. But search and rescue efforts are still continuing 24-hours a day.

“We’re holding up because we’re all holding up for that hope, that faith that we are going to be able to rescue somebody,” he added. “We are working tirelessly to try to bring victims that are underneath that rubble and rescue them.”

Crews are using various equipment and technology, including underground sonar systems that can detect victims and crane trucks that can remove huge slabs of concrete from the pile, according to Alavarez.

“Now that we have those huge cranes, we are doing big lifts,” he said. “That’s going to aid us in being able to laminate this building, almost like an onion, so that we can get inside and, again, find those voids that we know might possibly be there and rescue those people.”

Alvarez, who was among the rescuers sent to Haiti in 2010 to help find survivors after a devastating earthquake, urged those who have loved ones missing to hold out hope.

Some of the first responders are members of the Miami-Dade Fire Rescue’s urban search and rescue team, Florida Task Force-1, which is part of the Federal Emergency Management Agency’s National Urban Search and Rescue Response System and has been deployed to disasters across the country and around the world.

“For us, this is personal,” Obed Frometa, a fire lieutenant with Florida Task Force 1, told ABC News on Sunday. “Team members know folks, individuals that are trapped in that debris that were victims in this event. It’s been tough getting our teams off of these piles, you know, they want to keep going.”

Although officials have continued to express hope that more people will be found alive, no survivors have been discovered in the rubble of the building since the morning it partially collapsed. Stacie Fang, 54, and her 15-year-old son, Jonah Handler, were both pulled from the wreckage alive early Thursday and transported to a local hospital, where Fang later died.

Officials have asked families of the missing to provide DNA samples and unique characteristics of their loved ones, such as tattoos and scars, to help identify those found in the wreckage.

On Sunday afternoon, relatives of those unaccounted for boarded several public transit buses at the Grand Beach Hotel in Miami Beach, where a family reunification center has been set up. They were escorted by local police to an area near the disaster site so they could privately grieve, pray and hold vigils for their missing loved ones.

The cause of the partial collapse to a building that has withstood decades of hurricanes remains unknown. The Miami-Dade Police Department is leading an investigation into the incident.

So far, there is no evidence of foul play, according to Levine Cava.

“Of course, it’s not ruled out,” the Miami-Dade County mayor told ABC News last Friday. “Nothing’s ruled out. But, at this point, nothing to indicate that.”

Built in the 1980s, the Champlain Towers South was up for its 40-year recertification and had been undergoing roof work at the time of the partial collapse, with further renovations planned, according to Surfside officials.

A structural field survey report from October 2018, which was among hundreds of pages of public documents released by the town late Sunday, said the waterproofing below the condominium’s pool deck and entrance drive was failing and causing “major structural damage to the concrete structural slab below these areas.” The New York Times was first to report the news.

In a November 2018 email, also released by the town, a Surfside building official, Ross Prieto, told the then-town manager that he had met with the Champlain Towers South residents and “it went very well.”

“The response was very positive from everyone in the room,” Prieto wrote in the email. “All main concerns over their forty year recertification process were addressed. This particular building is not due to begin their forty year until 2021 but they have decided to start the process early which I wholeheartedly endorse and wish that this trend would catch on with other properties.

When asked for comment, Surfside commissioner Eliana Salzhauer said Prieto’s “interpretation of that report was misleading.”

“I don’t want to believe that some would go out of their way to mislead someone,” Salzhauer told ABC News on Sunday. “I think it was more about he didn’t want people to panic, and I can’t speculate as to what was in his mind, why — maybe — he never even got to page seven of the report.”

Surfside Mayor Charles Burkett told reporters he has read the 2018 structural field survey report but that he was not yet aware of the meeting with the residents where Prieto said the building was “not in a bad shape.” Burkett said his office is going through every correspondence that town officials have made regarding the Champlain Towers South and those details will also be published on the town’s website.

A 2020 study conducted by Shimon Wdowinski, a professor at Florida International University’s Institute of Environment in Miami, found signs of land subsidence from 1993 to 1999 in the area where the Champlain Towers South condominium is located. But subsidence, or the gradual sinking of land, likely would not on its own cause a building to collapse, according to Wdowinski, whose expertise is in space geodesy, natural hazards and sea level rise.

“When we measure subsidence or when we see movement of the buildings, it’s worth checking why it happens,” Wdowinski, who analyzed space-based radar data, said in a statement last Thursday. “We cannot say what is the reason for that from the satellite images but we can say there was movement here.”

Miami-Dade County officials are aware of the study and are “looking into” it, Levine Cava told ABC News last Friday.

Lawsuits against the Champlain Towers South Condo Association have already been filed on behalf of residents, alleging the partial collapse could have been avoided and that the association knew or should have known about the structural damage. ABC News has reached out to the association’s attorneys for comment.

The partial collapse happened as the Champlain Towers South Condo Association was preparing to start a new construction project to make updates, according to Kenneth Direktor, a lawyer for the association. Direktor said the building had been through extensive inspections and the construction plans had already been submitted to the town but the only work that had begun was on the roof.

Direktor noted that he hadn’t been warned of any structural issues with the building or about the land it was built on. He said there was water damage to the complex, but that is common for oceanfront properties and wouldn’t have caused the partial collapse.

“Nothing like this has ever been seen, at least not in the 40 years I’ve been doing this,” Direktor told ABC News last Thursday.