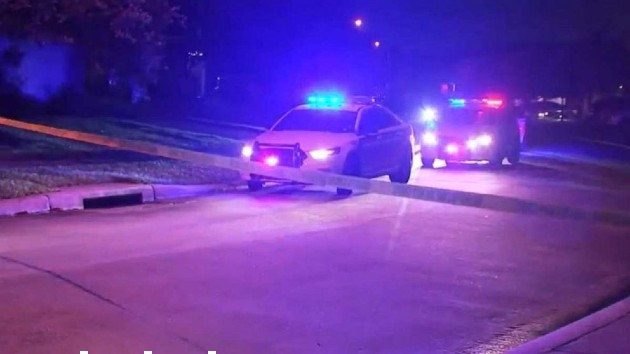 (HOUSTON) — A man has been arrested after allegedly cutting off the power to the home of his ex-wife and their four children before breaking in through a window and shooting her four times — all on the same day they were both scheduled to appear in court for a child custody hearing.

The incident occurred at approximately 3:30 a.m. on Monday, June 28, in the northwest suburbs of Houston, Texas, when the Harris County Sheriff’s Office was called to a home in response to a reported shooting and home invasion, according to ABC News’ Houston station KTRK-TV.

Authorities told KTRK that a preliminary investigation revealed that Aaron B. Wright is alleged to have gone to the unlocked power box on the side of the home and cut off power to the house where his ex-wife, Andrea Wright, and their four children — all between the ages of 5 and 12 — were sleeping.

Police then allege that Aaron Wright broke into the home through a back window before finding Andrea Wright and shooting her four times, according to the report by KTRK. The four children were sleeping in their beds at the time of the shooting and none of them were injured.

Surveillance obtained by KTRK shows the suspect and an accomplice approach Andrea Wright’s home on foot after allegedly driving there in his work truck and parking down the street. The pair can then be seen fleeing the scene in the opposite direction just minutes later. Deputies believe the second suspect is Wright’s new girlfriend.

“That guy has got to be crazy to do that in front of his kids, [try to] kill their mother, I mean there is something wrong with that guy,” a neighbor told KTRK in an interview following the incident.

Investigators told KTRK that Aaron Wright may have been anticipating losing custody of his four children later that day when Andrea and Aaron Wright were scheduled to appear in court for a child custody hearing.

Harris County Deputy Investigator John Mook told KTRK that he believes the couple has been divorced for about a year and that Aaron Wright has reportedly made threats to Andrea Wright’s new boyfriend in the past.

“I do understand that he has threatened the new boyfriend multiple times,” Mook told KTRK. “I’m sure this was a contentious divorce as well. We’re looking into all of that.”

Andrea Wright has allegedly called police to her home numerous times over the past three months and she even got a temporary restraining order against Aaron Wright last year. A judge denied a motion to make it permanent in November 2020, according to KTRK.

“Yeah, I think that’s a problem,” the unidentified neighbor told KTRK. “That is our judicial system, unfortunately, and I think there needs to be some changes to keep people like that away from these people — from her ex-husband who they know is a violent person.”

Andrea Wright was immediately taken to the hospital where she is recovering and in stable condition, according to a tweet from Harris County Sheriff Ed Gonzales. Investigators told KTRK that the four children are now safe and staying with their grandmother.

Aaron Wright was located just a few hours later and booked into the Harris County Jail on aggravated assault charges, according to Sheriff Gonzales. It is unclear if his accomplice was also arrested when he was taken into custody on Monday.

It is unclear if Aaron Wright has retained an attorney and the investigation into the incident is currently ongoing.