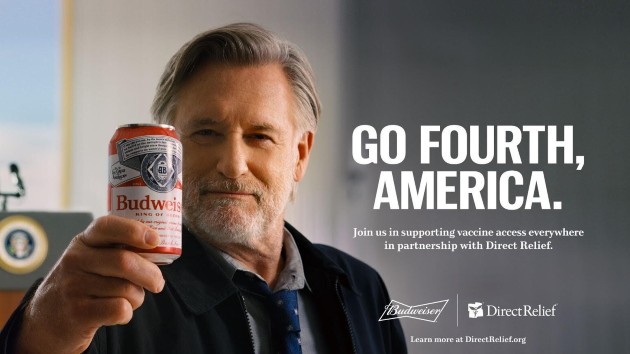 In a very clever bit of marketing, Budweiser has tapped actor Bill Pullman to recreate his rousing speech from Independence Day — but this time, he’s urging us to celebrate July 4 after last year’s lockdowns.

“We’re fighting for freedom for all,” Pullman says dramatically through a megaphone, as he did in the hit 1996 movie. “Not from alien invaders — from separation. From being cooped up while baking bread and ignoring basic hygiene.”

He continues, “The time has come for us to get fresh. Gather the crew. And eat veggie and meat burgers until we sweat.”

In the ad, Pullman uses the much of the same dialogue as he did in his original speech, in which he urged humanity to unite against an alien menace.  This time, however, he’s referring to the pandemic when he says, “And should we win the day, the Fourth of July will no longer be known as an American holiday, but as the day when the world declared with one voice ‘We will not go quietly into the night’…and…this thing will rue the day it ever messed with us.”

As he did in the film, Pullman closes to applause, saying “Today, we celebrate our Independence Day,” before uttering the campaign’s theme: “Go Fourth, America!”

In addition, while President Biden missed his mark of getting 70% of the country vaccinated by July 4, Budweiser’s parent company Anheuser-Busch still plans to celebrate the country’s vaccine progress with a “round on us” beer giveaway, plus a $10,000 prize for fans “to help them throw the most epic 4th of July party yet.”

‘The Wonder Years’ star reacts to Fred Savage’s exit: “There’s no such thing as bad publicity”