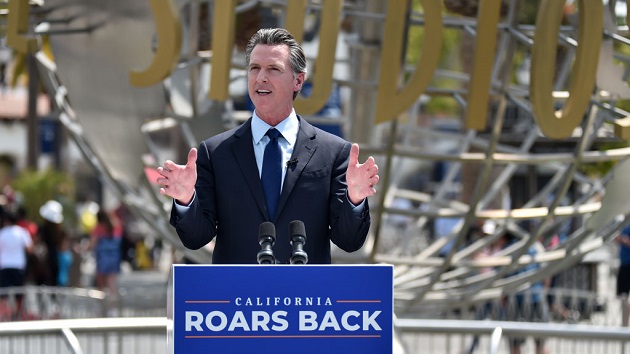 (SACRAMENTO, Calif.) — California voters will decide whether to recall Democratic Gov. Gavin Newsom and replace him with another candidate in an election set for Sept. 14, the lieutenant governor announced Thursday.

Secretary of State Shirley Weber certified the gubernatorial recall petition earlier Thursday, prompting Lt. Gov. Eleni Kounalakis to set an election date between 60 and 80 days from the date of certification.

While the signatures have only just been officially certified, Weber announced in late April that the organizer of the recall petition had collected more than the approximately 1.5 million validated signatures required.

During a 30-day period, voters who signed the recall petition could request their signatures be removed, but only 43 voters did so, Weber announced last week. More than 1.7 million signatures supporting the recall were verified.

The California Department of Finance estimated on Thursday the cost of the recall election to be $276 million.

Recent polling suggests Newsom is on his way to easily defeating the recall effort.

According to the Public Policy Institute of California’s May statewide survey, only 40% of likely voters would vote to recall Newsom if the election were held, while 57% would vote against recalling him as governor. To successfully recall the state’s governor, a majority of voters must vote “yes.”

Among Californians, 55% approve of the way Newsom is handling his job overall — and on his handling of COVID specifically, he fares even better, with 64% of Californians approving of his response, according to PPIC.

Newsom’s campaign has blasted the recall as a partisan, Republican-led effort that’s a waste of taxpayer money.

In response to the date being set, Juan Rodriguez, the leader of the Newsom-aligned group, “Stop The Republican Recall,” said in a statement, “This Republican recall is a naked attempt by Trump Republicans to grab control in California — powered by the same Republicans who refused to accept the results of the presidential election and are now pushing voter suppression laws across the country. On September 14, Californians will have the chance to defend our state and reject this Republican power grab once and for all.”

Most voters likely know Newsom is a Democrat, but back in February 2020, when responding to the recall petition, his team failed to indicate he wanted his party affiliation on the potential recall ballot. A spokesperson for the secretary of state confirmed to ABC News Tuesday that Newsom’s campaign filed a notice of his party preference to Weber on June 19, but the secretary declined to accept it, saying in a statement, “The Secretary of State’s office has a ministerial duty to accept timely filed documents. Acceptance of filings beyond a deadline requires judicial resolution.”

In a statement Thursday, Orrin Heatlie, the chief proponent of the recall effort, said they objected to the legal move, while Mike Netter, another proponent of the recall, blasted Newsom, saying, “The absurdity of this suit is almost surreal. This Governor is so focused on identity politics it is that important to him to actually sue his own appointed Secretary of State to demand she override a regulation which he signed into law.”

The California Patriot Coalition, which Heatlie and Netter co-founded, plan to intervene in the lawsuit next week.

When voters cast ballots, they will face two questions. The first is whether they want to recall Newsom and the second is who they want to replace Newsom if a majority of voters support the recall.

Though the recall organizers said they are nonpartisan, Republicans have rallied around the effort, including the California Republican Party, whose chairwoman called Newsom the “worst governor in California history” in a statement after the date was set.

So far, no major Democrats have announced campaigns to be on the recall ballot to replace Newsom. Organizers and Republican candidates vying to replace the governor have pointed to his handling of the pandemic, in particular government-mandated restrictions on businesses and schools, and general government overreach.

This is the sixth official attempt to recall Newsom. Only one California governor has ever been successfully recalled in the United States. In 2003, California’s Democratic governor, Gray Davis, lost the recall election, and actor and Republican Arnold Schwarzenegger won the election to replace him.

According to PPIC’s polling, Davis’s approval rating was significantly worse than Newsom’s ever has been while in office. In five polls over nine months leading up to the 2003 election, over 70% of California voters disapproved of Davis. The state today is also far more Democratic than it was in 2003.