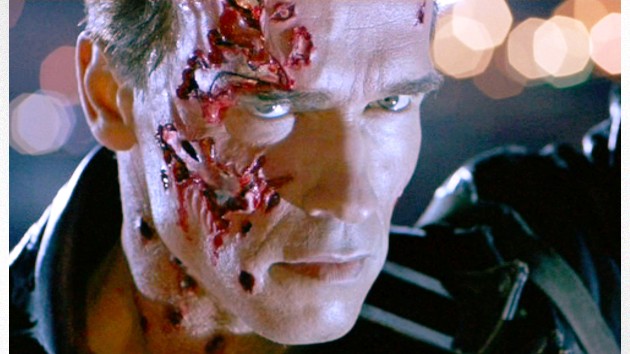 On July 3, 1991, James Cameron‘s Terminator 2: Judgment Day, the sequel to his low-budget 1984 sci-fi classic The Terminator, blasted into theaters.

The original had a human resistance fighter traveling back in time to save a young woman named Sarah Connor from an unstoppable killing machine from the future, so that she one day could give birth to a son who would turn the tide in a future war against the machines.

Terminator 2: Judgment Day reunited Linda Hamilton as Sarah Connor, with Arnold Schwarzenegger‘s T-800 cyborg — but this time he was sent back to protect her 10-year-old son, John, played by Edward Furlong, after the Skynet artificial intelligence that controls the machines sends back an advanced terminator model, a shape-shifting liquid metal prototype known as the T-1000, played by Robert Patrick, to kill John. But first, the T-800 and John have to break Sarah out of a psychiatric facility.

Then most expensive film ever made and boasting then-bleeding edge visual effects, Terminator 2: Judgment Day was a smash hit, and remains one of few sequels to surpass the original in the eyes of many fans. It grossed more than $520 million worldwide and earned Academy Awards for Best Sound Effects Editing, Best Makeup for late legend Stan Winston, and Best Visual Effects for the team at George Lucas‘ Industrial Light and Magic, which used nascent computer technology to bring the liquid metal killing machine to life.

There have been four Terminator films since Terminator 2: Judgment Day, the most recent being 2019’s Terminator: Dark Fate.  But none have reached T2’s critical and box office heights.